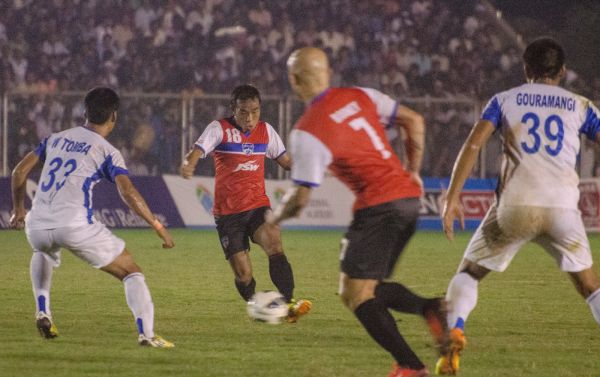 Malappuram: Bengaluru FC missed chance to avert last round drama and qualify for the semifinal of the Federation Cup when they conceded late  goal to draw 1-1 with Rangdajied United at the MDSC Stadium, in Manjeri, on Saturday. The result meant Group B is still wide open after Sporting Clube de Goa beat East Bengal 2-1 in an earlier fixture.

Like in the game against Sporting Clube de Goa, Bengaluru blitzed off to a dream start, only this time, much sooner. Siam Hanghal slid one through the centre that Thoi, with his pace, reached and latched on to before slotting past ’keeper Surjay Pariyar’s right.

Bengaluru kept stringing good, swift moves but the effort was often blanked in the attacking third. Rangdajied, on their part, didn’t do much to warranty an equlaiser. Their best chance came in the 13th minute when John Menyongar lost possession to Edmar Figueira in a dangerous position but John Johnson stepped up with a timely challenge to avert danger.

The second half didn’t see either side looking to do anything that would change the game as Bengaluru were keener to own possession and kill the tie off. However, the absence of a second goal came to haunt the Blue when Tamba jumped high to head home Rangdajied’s goal from a freekick.

At the end of two rounds, Bengaluru FC lead the table with 4 points, Sporting Clube de Goa have 3, Rangdajied have 2 and East Bengal have 1. Bengaluru play their last league game against the Kolkata team on the 21st, the same day as Sporting take on Rangdajied.