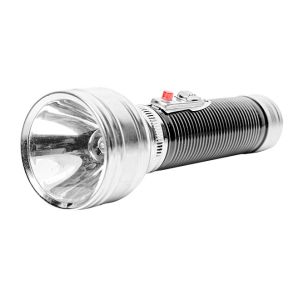 In a bizarre move today, the All India Football Federation (AIFF) urged the Indian football fans to carry a high-power torchlight to watch evening matches of the upcoming I-league 2013-14.

This move comes after the heavy protests by the Indian football fraternity regarding the I League matches being held under the scorching sun at 2 pm. Last season a young Pailan Arrows player was literally brought back from the dead (Read the story) when he collapsed while playing under immense heat. All these incidents have forced the AIFF to schedule the I-league matches in the evening. This is where the problem arises.

While most of the stadiums have recently installed floodlights, the AIFF does not believe they are reliable.

The floodlights are not reliable and have a history of blacking out. We do not want this embarrassment and hence have asked the fans to carry torches as backup.

It is to be noted that there have been several incidents of floodlight blackouts during football matches, particularly in the Salt Lake stadium, Kolkata.

It was also noted that the fans can have their own laser lights along with torches which can enable them to have electric shows. This will also help in raising the brand value of I League.

To encourage the fans to carry torches, AIFF has announced a special incentive.

We are offering 10% discount on the tickets to whoever carries his own torch!

This is a huge boost since the fans were reluctant to pay Rs 20, a huge price considering the quality of the matches being played at 2 PM.

The Indian football fans are unhappy with this decision of AIFF. They are demanding that the host teams should arrange for the torches in the stadium like they do for 3D glasses in cinemas, without the charge of course.