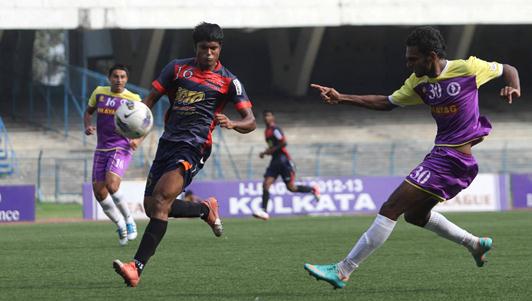 It has just been an year since the death of a young footballer Venkatesh in Bangalore due to the unavailability of immediate medical help. This was covered even by reputed international news agencies due to the sheer ‘believe-it-or-not’ factor. AIFF learnt the lesson and now ensures that ambulances are present during I-league matches. But one asks, does this give AIFF extra courage to push the players in deadly playing conditions?

Yesterday, during an I-league match between Prayag United and Pailan Arrows, a fatal situation involving Pailan player Prabir Das was averted due to timely intervention of  Prayag physio and medical team. This news would not make big headlines as their was no death invoved. But this is the time when as an Indian football fan we should stop taking this  nonsense from AIFF.

The matches in Kolkata are played at 2 pm in the afternoon. Anyone who has been there in April will know it is hard to even step out of one’s house in the treacherous sun, let alone play football for 90 minutes. But AIFF forces the players to entertain us in that death trap. At 40 C and the turf below being even hotter, with humidity reaching over 85%, even a few minutes of jogging would have you gasping for breath. But do those officials sitting in their air-conditioned offices even care?

When the floodlight is available, what is the need of playing under the sweltering heat? Ask an AIFF guy and pat comes the answer: ” we have telecast right obligations with Ten Sports”. This basically means that the TV slot for I-League telecast on Ten Action have already been allotted and if the timings are now changed there would be no telecast.

Really? What is this that we are watching on TV? Is it supposed to be some kind of medieval times’ sport in which the one who survives is the winner and the rest die? And does the AIFF think that the  handful of Indian football fans who care to watch a mediocre league turned even more mediocre with 2 PM summer kick-offs  take great pleasure in seeing their footballers panting and struggling?

The point is that telecast of I-league matches are dispensable, a person’s life is not. If the change of kick-off timing risks foregoing the live-telecast, so be it. You cannot risk even a single individual’s life for the sake of a tamasha on TV. But it seems that the All India Football Federation is waiting for an untoward incident to happen before it can learn its next lesson.

I would seriously urge the players, club officials, the IPFCA and the football fans to refuge to oblige to this nonsense.  Boycott matches that are forced in unfriendly conditions. We want good football not blood on the green turf.

NB: A big thanks to the people whose prompt action helped revive the young footballer. Eye-witnesses say, he was literally brought back from the dead.