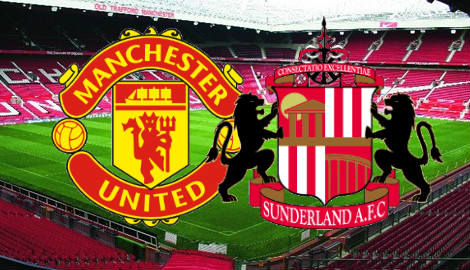 Sunderland beat Man Utd 2-1 on penalties after the final score remained 2-1 after extra-time, identical to the first leg where Sunderland was on the winning side.

Evans scored in the 37th minute to give Man U the lead and the scored remained 1-0 in favour of Manchester United till the regulation time, keeping the aggregate at 2-2. But in the last minute of extra time, Bardsley scored taking advantage of a howler from De Gea. Just when it looked like Sunderland were through, Hernandez scored in the dying second to take the match to the penalties.

Surprisingly, Welbeck, Gardner and Phil Jones put their spot-kicks over the bar and Adnan Janujaz’s penalty kick was saved by Vito Mannone to give them a thrilling win.
Watch the full penalty shoot-out below!

To watch Manchester United vs Sunderland live stream free ronaldo 7 justin tv firstrow link is given at the end of the article.

Manchester United will host Sunderland in the second leg of the semi-final match of the Capital One League Cup tonight at the Old Trafford.

Man Utd have virtually pushed themselves out of the EPL title race and they have been kicked out of the FA Cup by Swansea with a shocking 2-1 defeat. The League Cup seems to be their only realistic chance to get their hands on a siverware.

But their task has not been made easier by a 2-1 loss at the hands of Sunderland in the first leg of the semi-final which means that Man U will have to put in extra effort to reverse the deficit.

Man United vs Sunderland live stream free link is given at the end of the article.

Sunderland have not won at the Old Trafford in 46 years, but the way all the teams are breaking records at The Theatre of Dreams, it doesn’t seem to be a strong fortress for ManU any more.

The visitors have lost just one in their past 9 matches but the way they conceded 2 goals within half hour against Southampton last weekend, it shows their vulnerability in the defense which Man United will be looking to capitalize on.

Manchester United skipper Nemanja Vidic once again would be out of action to start his three-match ban following his suspension in the match against Chelsea. Patrice Evra and Wayne Rooney too are doubtful due to injuries while Robin van Persie is not playing either.

Sunderland would miss their forward Steven Fletcher, however they would be looking up to Adam Johnson who hasbeen instrumental in 9 of the 11 goals scored by Sunderland.