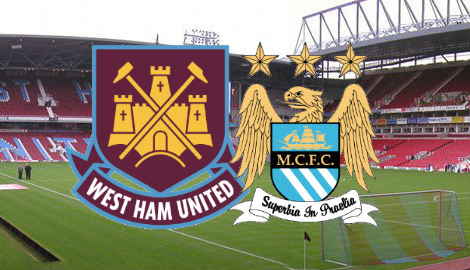 To watch West Ham United vs Manchester City live stream free ronaldo 7 justin tv firstrow online link is given at the end of the article.

In the second leg of the semi-final of the Capital One League Cup, the Man City manager Manuel Pellegrini would most likely rest his important players. A virtually unassailable lead of 6-0 in the first leg has almost ensured their entry into the final.

Stevan Jovetic is hopeful of a place in the team while Sergio Aguero will continue to play as he is aiming to regain match fitness after recent comeback. Jack Rodwell too can be seen taking the field for City.

Kevin Nolan would make a comeback for West Ham after completing his four match suspension while James Tomkins is back after serving a one-match ban. Andy Carroll and Ravel Morrison could come off the bench.

The Hammers are struggling in the premier league and their latest hammering by Newcastle has pushed them down in the relegation zone. They would play for pride as the chance of making it to the final is impossibility.

The visitors are on a dream run in all competitions and this could be their first of the four silverwares they are chasing. Having pumped in 100 goals in just 34 matches this season, the team looks nearly unstoppable.

In another semi-final, Manchester United vs Sunderland will decide who will be the opponents of Man City in the final of the League Cup.

West Ham vs Man City will be telecast live on Ten Action and Ten HD, kick-off at 1:15 AM IST. UK viewers can watch it live on Sky Sports 1. A free live streaming will be available at the following link: