Cameroon, the ‘indomitable lions’ have lost some of its international reputation in recent times. The once dominating force in African football, they even failed to qualify for Africa Cup of Nations in 2012, a tournament which they have won four times. However, in the ongoing Nehru Cup (2012), Cameroon ‘A’ team has shown enough quality and class against the SAFF ‘minnows’. Playing without any of their Europe based players, the Cameroon ‘A’ team has so far played with a style and efficiency which have earned accolades from their rivals.

This Sunday (2nd September 2012), when they take on India for the last time in this Nehru Cup, they will start as clear favorites. Most Cameroon players have proven themselves to be of superior technical and physical abilities than their Indian counterparts and thus, the only way Wim Koevermans’ India can prevail over this African outfit is by deploying tactics aiming to disrupt the rhythm of the opposition and cashing on their deficiencies. Here I discuss the tactical aspects of Cameroon’s game specifically focusing on their main strengths and weaknesses which will play a role in deciding this match.

Emmanuel Bosso’s team is best defined by its abilities of possession based passing and speedy attacks through the flanks. They seem to be most comfortable in attacking and likes establishing its dominance in the opposition half by retaining possession. They hardly play long passes or the aerial ball. Most players in the lineup have attacking tendencies with attacking instincts seen from the wing backs and defensive midfielders. While defending, the team relies more on its physical abilities and assumes a 4-2-3-1 formation which is fluid enough to initiate quick transition from defense to attack.

Strengths # 1: Cameroon’s most attacking moves are through the flanks – 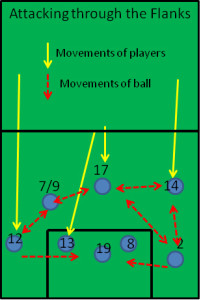 Cameroon like using flanks, ably supported by wing backs – no. 12 Bebey Kingue (Right) and no. 14 Jean-Patrick Abouna (Left). One can often see the wing backs makes darting runs down the flanks and their partnership with the wingers, no. 7 Clevis Ashu Tambe (Right) and no. 2 Joseph Momasso (Left), are threatening and how India handles them would probably be most crucial in determining the outcome of this match. They also have the highly talented Charles Eloundou (no. 9), who is expected to come as a substitute and can play in both the wings. These wingers are speedy and provide low or ground crosses rather than the traditional lofted crosses. In many cases the players who meet these crosses are not the strikers but central midfielders who run into the box, surprising the opposition defenders. No. 13 Thierry Nioga, currently the top scorer in Cameroonian MTN Elite one league, does this more often than his midfield partner Stephane Mpondo (no. 17).  In the right, Kingue moves much more, allowing Tambe to drift more centrally, whereas, in the left, winger Momasso keeps moving down the flank with Abouna not moving as much as Kingue. At their full flow, Cameroon surrounds the rival box from all direction – In Left you have Momasso and Abouna, in right you got Tambe and Kingue whereas striker Kolony Merimee (no. 19) is joined by withdrawn forward Alix Bertin (no. 8) and in many times by Nioga. Behind them stands Mpondo who can take on the back passes and switch the epicenter of the attacks with his clever distribution. However, India with their hard tackling in the midfield are not expected to give them that kind of freedom which they got against Nepal and Maldives.

Although Cameroon prefers establishing their dominance with some neat possession play, what has come as a major threat from them is their quick transition from defense to offence. Time and again their through balls from their own half have caught the rival defense napping. With the threatening speed of forward players like Alix Bertin and Kolony Merimee and the wingers – Momassa and Tambe, the Indian defenders and side backs need to stay aware when they go up in the attack. This is a serious threat as India has shown vulnerability against speedy attacks, with the center backs Gouramangi and Raju seen susceptible against pace. In fact, the lone goal scored by Cameroon against India in the league phase is exactly scored like this when a pass from inside their half reached Samuel Bitte, who ran all the way to score. Even in India’s match against Maldives, Gouramangi was frequently found lacking against Ali Ashfaq’s pace although he didn’t score thanks to some poor finishing and Subrata Paul’s timely interventions. 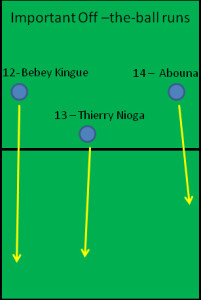 One of Cameroon’s top qualities has been their off-the-ball runs. In the flanks, the wing backs keep on sneaking down the line, whereas the central midfielders, who play deep, are suddenly spotted inside the rival box. This is another area which India needs to take care of. Cameroon has scored in corners a few times through headers of no. 17 Stephane Mpondo. With the attacking players well marked, Stephane, the defensive midfielder, frequently drifts into the box and remains, mostly, unmarked. He already has 3 goals from 3 matches.

Although Cameroonian’s enjoy the distinct advantage of height, their handling of aerial balls in defense has not been the best. Both the Syrian goals came from set pieces – first one a direct header, while the second one was a volley from edge the box, but the opportunity came after Cameroon couldn’t clear a free kick. Even in the Indian game, Manandeep, Nabi and Francis actually won headers in scoring positions inside Cameroon box. Cameroon’s goalkeeper, Lawrence Ngoe, has shown to be a good shot stopper, but he is poor in handling the aerial balls where he either gets caught out of position or just parries the ball weakly. Sunil Chhetri’s qualities of winning headers and score from them would be crucial in exploiting this weakness. Apart from Sunil, in the set-pieces Rahim Nabi can come up, who is known for his heading qualities.

A good defensive partnership develops with time and this Cameroon team has been assembled relatively recently and thus they do exhibit certain deficiencies. The Syria match, where the Cameroon defense came into a sustained pressure, showed the problems in Cameroon back line. Under pressure, they frequently resort to poor tackling which results in free-kicks in crucial positions. The two central defenders don’t always play in parallel, with one staying a bit back, more like a sweeper. This gives India a chance to break through the offside trap. The quality of positioning of Francis and Sunil and the quality of through balls from the Indian midfield will be crucial in this aspect. 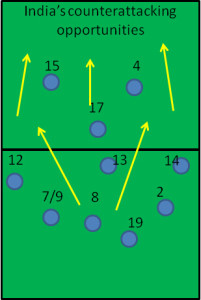 Cameroon’s one of the biggest strength is that they have very good overlapping wing backs who love going up at every opportunity. However, that also gives a situation to be exploited. If India can counterattack through the flanks with speed, good scoring opportunities may come their way. Strangely, none of the teams have exploited this aspect of Cameroon. One reason is that the wing backs are very fast and they track back quickly, thus any counter attack needs to be operated at good pace. Indian wings have created goals, but they haven’t been very speedy, something which might impede on such plans of counter attack.

Weather and ground conditions have played an important role in this tournament so far. In this match, if the ground becomes wet and muddy it will hurt Cameroon’s chances as they play along the ground as much as possible.

Expected Cameroon Line up (with Jersey no.) :