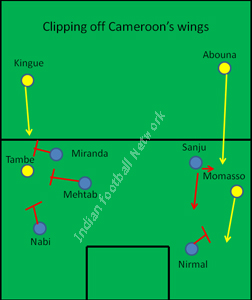 2nd September, 2012 – A date Indian football fans will never forget. On this day, India defeated Cameroon in the Nehru Cup finals. Yes, it is true that this Cameroon team was not the same ‘Indomitable Lions’ which features players like Song, Choupo-Moting, Matip, Chedjou and many more, it is also true this match was not even a FIFA recognized match and thus won’t affect the rankings. However, this Cameroon team boasted some of its best talents and youngsters from their local league who are trying hard to get into the main national squad and clubs abroad. More importantly, the team was clearly the strongest team in the Nehru Cup, which featured Syria, Maldives and Nepal apart from the hosts, India. Cameroon were worthy of the ‘favorites’ tag, won 3 and drew 1 game in the group stages, scoring 11 goals and conceding only thrice. Yet they couldn’t beat 168th India in the 120 minutes of play and then lost out in the penalties. Earlier in this column, I had mentioned that the only way India can win against Cameroon is by deploying tactics aiming to disrupt the rhythm of their flanks and cash on their aerial deficiencies (mentioned in details in the article), something which the Indian team did very well. Here, I review on major factors which determined the game.

Cameroon, throughout the Nehru Cup, had used their wings to initiate attack. Their Right flank was especially more active in initiating attacks with buildups from Right winger, Clevis Ashu Tambe (no.7) and Right wing back, Bebey Kingue (no. 12). The match started in a similar pattern, with Cameroon attacking from right. However, a determined Nabi (Left Back) and Miranda (Left Half) thwarted every attack from that flank. Nabi was in a full time defensive role and Clifford hardly made attacking forays down the left, in fact, in the first half India had one proper attacking move from the left wing. So, effective were they that the Cameroonians didn’t cut into the Indian box a single time in the first 90 minutes, doing it a couple of times in the extra time, when the India’s were clearly tiring. Nabi was at his top form with perfect tackles coming from him every time Tambe tried his darting runs. Clifford made sure that Kingue doesn’t overlap or support Tambe. Furthermore, Mehtab Hossain, who had played in the right side of the central midfield player, was deployed in the left side and he frequently pressed Tambe and regularly came to help Nabi and Clifford. Cameroon’s right wing deprived of space and time had to back pass and change their plans. Such were their effectiveness that within 15 minutes of play Cameroon started resorting to long rangers and lofted crosses which they haven’t done much in the ongoing Nehru Cup. By 30 minutes or so, Cameroon concentrated on its left, with Tambe drifting more centrally.

Cameroon shifted leftwards only to find a gritty Nirmal Chhetri

Soon Cameroonians started exploiting the left flank. India’s right flank had Sanju Pradhan as the winger, who is not known for his defensive qualities, and thus, Cameroon’s left winger, Momasso (no. 2) could make more runs towards the left edge of the Indian box. However, almost every time he went close to the box, Nirmal Chhetri was there to block his runs or crosses. Nirmal and Momasso had an interesting duel throughout the match with Nirmal clearly frustrating him with his interventions. Momasso gradually resorted to long rangers and lofted crosses, which clearly were not Cameroon’s strong points. Jean-Patrick Abouna (Left wing back; no. 14) made fewer overlapping runs, and when he did, Sanju Pradhan came to Nirmal’s aid. With both the flanks non functional, Cameroon started using the central route more often with Thierry Nioga Makoun (no. 13), becoming more active than he had been in the whole tournament.

Where was Alix Bertin Ebanga gone?

With Makoun making attacking moves down the middle, it was imminent that the more central players combine with him, more specifically, Alix Ebanga (no. 8), the withdrawn forward needed to support and link Makoun with striker Kolony Merimee (no. 19). Much to India’s advantage Ebanga had a forgettable game. Throughout the game Ebanga was hardly seen with possession and rarely made any impression on the flow of the game. However, even without Ebanga, Makoun continued to be a threat, scoring a goal and missing a few, but Ebanga’s support in outside the box could have turned the match the other way.

In the group stages, the Syria and the India games showed that Cameroon’s defensive vulnerabilities lie in the aerial route. And thus, in the attacking zone, instead of playing short ground passes, what was important that India uses lofted crosses and free-kicks to exploit Cameroon’s weakness. The 19th minute goal came exactly the way Syria’s first goal against Cameroon had come. From a nicely lofted Clifford Miranda free-kick, Gouramangi headed in the goal with no one marking him. Although India scored only one goal in this manner, India had won six more such headers in the box, many of them unmarked – Sunil (13’, 52’), Gouramangi (52’), Robin (69’, 105’) and Francis (84’). 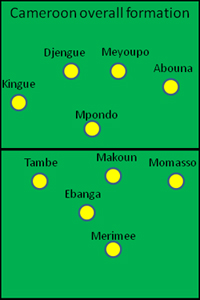 Cameroon coach, Emmanuel Bosso, had the disadvantage of having only two substitutions of his choice as he was forced to substitute the goalkeeper due to injury. However, some of his decisions were surprising. Ebanga had a woeful game where he hardly saw the ball and failed to influence the game, surprisingly he was substituted only at the 81st min. Bosso first substituted Merimee, the striker, with Charles Eloundou, a winger, when they were leading 2-1. The team readjusted such that Eloundou take the right wing position and try yet another attempt to break through Nabi and co. Unimpressive right winger was not taken out, Tambe, was not taken out, instead he was shifted as the withdrawn forward and Ebanga took the strikers role. Thus, he kept two of the unimpressive player in the fray – Ebanga and Tambe, while sacrificing Kolony, a genuine striker. True that Kolony was not impressive but replacing his position with with Alix seemed to be a big gamble. As India clawed back into the game with a goal, Bosso next replaced Ebanga with O. baba (no.11), who took the strikers position. Interestingly Baba has played in this tournament as a right winger and a right back (against India in group stages)! Thus, the team lacked genuine strikers and dependent on attacking midfielders – Makoun, Tambe, Baba, Eloundou and Momasso. Cameroon is no Spain and India kept following their defensive tactics religiously. The wingers switched positions, the forward players moved back and forth, but nothing worked. At the end Bosso, ended up making changes where he kept one unimpressive players – Tambe for the full match, and Ebanga till 81st min, while sacrificing a genuine striker. At the extra time, when Indians were tiring, and Cameroon were pressing hard, a striker could have made a difference. 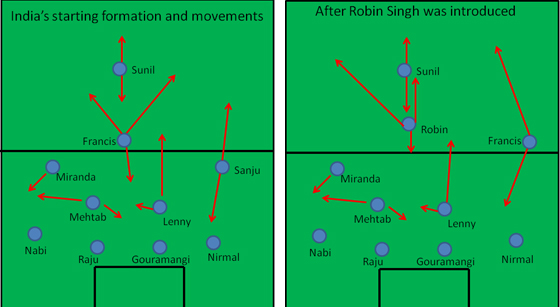 On the other hand, Koevermans made a tactical switch which worked pretty well. In the right wing, Sanju Pradhan was fading out of the game, something which was seen throughout the tournament. Francis Fernandes, from his central midfield role, took his place, while Robin Singh, who replaced Sanju, came to take the withdrawn forward role. Now Robin brought two advantages – He frequently drifted leftwards and activated the left wing, which was dormant due to Miranda’s defensive roles, and his height also meant that he had aerial advantage. Robin’s introduction also increased attacking options. Frequently Robin, when drifted left, Sunil will take the central position in the box while Francis will drift in from right into the box, thus, India at certain times had three attacking players from left, right and center. Robin’s inclusion also meant that he would play as a target man with Sunil aiming to run forward and beat the last defender and vice versa. It was no surprise that all the Indian offsides came during this period. India’s second goal was created by a clever move by Mehtab Hossain when he snatched a ball passed to Eloundou and played a through ball, with Sunil beating the offside trap and rushing into the box, when the goalkeeper, Hosea, tripped him to concede a penalty which was taken successfully by Sunil.

As the match went to the finishing stages, India’s resilience was slowly breaking. Nirmal had a hamstring cramp and was replaced by Denzil Franco, who played the full extra time. Nabi was having a few problems of fatigue and during the extra time, the Cameroonians did manage to initiate better attacks from their right flanks. Mehtab Hossain made mistakes of mis-kicking and fouling at crucial positions. Even with fatigue, Indian players did show a great spirit, motivated by a huge crown of about 30,000 cheering for them. Cameroon players did get some of the best chances through shots from Baba (101’), Makoun (104’), Momasso (106’), Elandou (109’) and a few others. This was probably India’s worst phase in terms of loss of composure and no. of mistakes made, but Cameroon couldn’t capitalize on that.

None of the goalkeepers had to perform heroics as both teams scored till the last Cameroon shot by Makoun (ironically by one of their top players of the match), which hit the post and gave India a result which was churned out by some good match reading by Koevermans and a spirited performance by Indian team. Under Koevermans, India may not have started as an attractive outfit but certainly is an efficient team, which is the need of the hour.