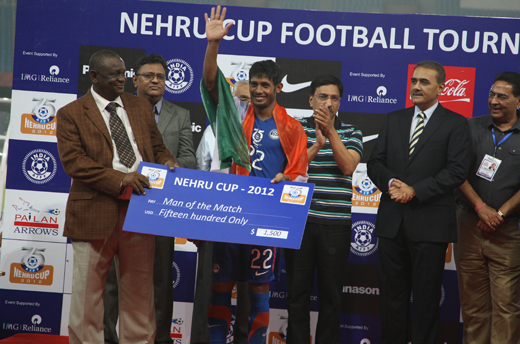 Two days after winning the Nehru Cup for the third time in a row, versatile Team India player and one of the heroes of the tournament Syed Rahim Nabi spoke at length to www.the-aiff.com about the win, his performance, and the road ahead. EXCERPTS:

People label you as a ‘versatile player.’ Do you agree?

I started my career as a striker. Under Subhash-sir (Bhowmick), I played side back and from then on playing in different positions became my forte. I am comfortable anywhere. During training, Coaches keep on joking that I should have remained a striker!

You know the other day I was sharing this story with the Cameroon No.3 player – the same guy who right back in the last league match (which we lost) but came on as a substitute to play upfront in the final. He was amazed to hear that I started off as a striker. But I am really happy with the manner things have shaped up in my career. I’m ever ready to play any position the Coach finds me suitable.

Are India are a better side than what the rankings project?

We have to play more on FIFA dates. We are a side on the rise and that has to reflect at the World stage. The clubs have to be supportive as well as the media. Playing on FIFA dates will make the result count. Surely, we are much much better than the FIFA Rankings.

What do you think was India’s X-factor in this Nehru Cup?

The never-say-die attitude instilled by our Coach was special. He used to tell us ‘I want the Cup.’ He wanted to focus on the task ahead and not be overawed by anything. One game at a time was his philosophy. It helped us tremendously.

We are confident bunch and the camaraderie stays fantastic. The days in the Camp just flew by. If you noticed, in the final, we closed their movement on the flanks and that did the trick for us.

How do see the future of Indian football?

I reiterate, it’s on the right track and heading in the right direction. We need to invest judiciously and promote the game. AIFF is doing a great job for sure. Media has a role to play as well. They need to highlight budding talent. The likes of Lenny (Rodrigues), Francis (Fernandes), Denzil (Franco), Nirmal (Chhetri), Jewel (Raja), Manandeep (Singh) deserve the limelight. It is not only about Nabi, Sunil (Chhetri), and Subrata (Pal).