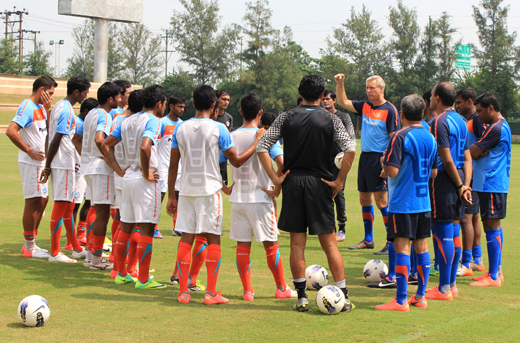 NEW DELHI: Read Win Koevermans instead of Wim Koevermans. ‘N’ and ‘M’ being next to each other, the mistake may happen to anyone, anytime. But you, abreast about all the latest happenings in the ongoing Nehru Cup, may just overlook the mistake and enjoy the unintentional pun. Maybe!

Technicalities aside, the Dutch tactician, on his first assignment with the Indian National Football Team, has indeed instilled a winning mentality in his ‘New India,’ which, under his tutelage, is adapting to a style that is shaping modern day World Football with the present World Champions being its best exponents.

Ranked 168th in the world, there’s certainly a difference between India and 59thranked Cameroon. But for a start, the 52-year old is a runaway hit if India’s run in the ongoing Nehru Cup is any indication.

If India’s 3-0 demolition of an in-form Maldives saw the very best of possessional football in a flexible 4-4-1-1 system, their 0-1 defeat at the hands of the Indomitable Lions brought to the fore their hunger to win a football match — no matter how strong the opposition was. Though India lost 0-1, their performance was very convincing.

Koevermans, at the post match Press Conference, was quick to point out that this Team was shaping up perfectly for the future. “A good team needs a strong bench and I’m pleased to see the bench playing so very well when given a chance. The likes of Manandeep (Singh), Jewel (Raja), Gurwinder (Singh) and Alwyn (George) fought so valiantly against a World Class team like Cameroon,” he said.

“They are ranked 59th in the World but the way our boys played against them was laudable. The bench is at par with the starting XI and that’s a very good sign for the future.”

You bet Indian football is in safe custody. You are convinced even more as Koevermans adds: “Our main target is to qualify for the AFC Cup.”

Confidence is one word Koevermans repeats whenever asked about his opposition. “I’m confident ahead of the final. I always stay positive so that the boys can be confident as well. You need to feel good ahead of a big match.”

Koevermans’ assessment of playing against the might of Cameroon is also spectacular. “Cameroon are a top side and there is no denying that. They are physically very strong and have a lot of pace in their ranks. They may be better equipped than us. But we are prepared as well. Playing against Cameroon in itself is a great achievement. It’s a great exposure. We’ll take back a lot.”

Koevermans sights Alwyn George’s example. “He came in late in the second half on Friday (August 31) and almost scored a goal. He was brilliant in the ten minutes he was on the field. That will surely make him more confident. For a youngster, a good show means a lot.”

Ask Alwyn and he is overwhelmed. “I wanted to grab the opportunity with both hands and it was a lifetime opportunity to play against Cameroon. I’m happy I could prove my mettle.”

A skeptic may argue of overconfidence creeping in. What about preparations? How do you stop players like Kingue Mpondo, Jean Patrick Abouna and Ebanga Bertin who have impressed all so far?

Koervermans’ answer is reassuring to say the least. “We know their strengths. We are preparing ourselves.”