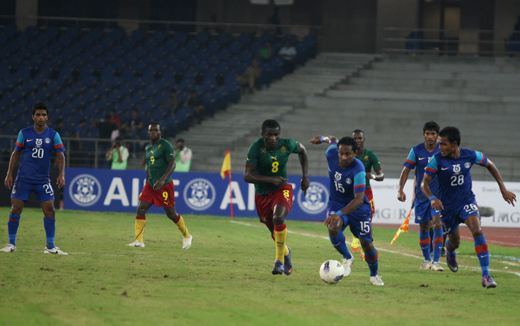 It was the Dress Rehearsal – the Dress Rehearsal for Sunday’s Nehru Cup final. As any Coach would want to do in such a situation, Wim Koevermans turned to his bench. It was the best time in the Tournament to rest some of the regulars. Hence, on Friday (August 31) against Cameroon as India took the field, mainstays, Captain Sunil Chhetri, Subrata Pal, Lenny Rodrigues took the dugout; and along with the trio, Raju Gaikwad and Anthony Pereira too.

The ‘bench’ didn’t let one down. Even as Cameroon took the lead through Bitte Samuel in the 2nd minute, the midfield had enough character in their repertoire. At times, it was difficult to trace Syed Rahim Nabi, who overlapped to add to the strength in the midfield and Mehtab Hossain played the perfect foil.

India stuck to a plan. There were a string of passes stitched; the ball shuffled from one flank to the other, the pace slowed down, and on two occasions, a Denzil Franco cross had Manandeep and then Jewel Raja in the clear. India should have scored from both.

Goalkeeper Karanjit Singh, who couldn’t have been blamed for the first goal, however, made amends saving a Ebanga Bertin penalty in the 40th minute. The penalty was awarded when Nabi had tripped Eloundou Charles inside the box. But as Ebanga tried to do a ‘Andrea Pirlo,’ Karanjit was quick enough to recover and gather the ball; the loudest cheers being reserved for Chhetri and Pal from the bench. One needs to credit Karanjit for his reflexes.

The defensive organization also needs to be credited. Against a team which has stayed deadly from the set-pieces, especially form the corner-kicks, the defense led by Captain Gouramangi Singh kept everything at bay. The presence of taller Cameroon rivals didn’t bother them.

Changing over, India pressed hard. In the 51st minute, a Nabi header off a Mehtab Hossain corner sailed inches over. It was till then, the easiest chance of the match. Minutes later, Jewel snaked in between the two stoppers but Robert Ntolla recovered in the nick of time to deny him.

India’s last chance came in the 83trd minute. Sanju Pradhan broke down the right and essayed perfectly for Francis Fernandes but his header went straight to rival goalkeeper Nkessi Hosea.

The final, as Wim Koevermans, maintained the other day, will be an “interesting one” for sure.