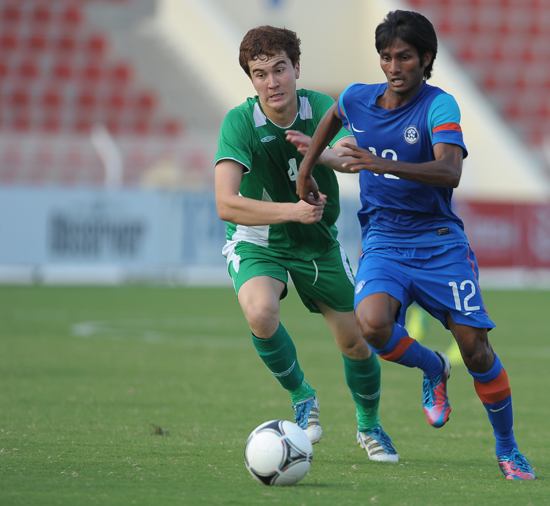 MUSCAT: The goal stayed inevitable but the wait continued. Sometimes one became impatient as opening the rival goalmouth at times, looked like improbable — simply because Turkmenistan were not willing to push forward. By the 15th minute itself, they had 10 men defending.

The deadlock eventually broke in the 36th minute. Romeo Fernandes, India’s super-sub against United Arab Emirates made justice of Arthur Papas fielding him in the Starting XI. As he broke through inside the penalty box, rival defender Komekov Hemayat, beaten by Romeo’s sudden burst, found it best to bring him down.

Midfielder Lalrindika Ralte slotted it past Turkmenistan goalkeeper Garayev to put India in the lead.

India defeated Turkmenistan 4-1 in their fourth match of the AFC U-22 championship Qualifiers at the Sultan Qaboos Stadium in Muscat. India now move to 7 points from 4 matches and next play hosts Oman on July 3.

Besides Dika, Alwyn George scored in the 69th minute and Romeo Fernandes, in the 76th minute. Jeje Lalpekhlua converted from the spot in the 86th minute to complete the rout. For Turkmenistan, Italmazov Farhad equalised in the 59th minute.

Barely four minutes after Dika’s penalty conversion, Alwyn George, still then, a bit suffocated in between a horde of Turkmenistan players, got past two but his prompt left-footer hit the post. 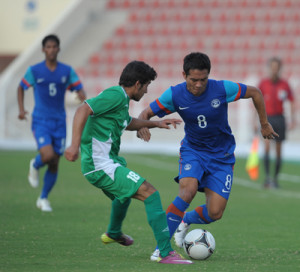 India started on a cautious note. They stayed content in building from the back and switched flanks on a regular basis. There were passes being stitched, positions being interchanged. India had the regulator with them – they controlled the match.

Changing over, Turkmenistan started-off with more purpose. The first five minutes had the Indians defending. The organisation stayed good but despite it, captain Gurpreet Singh Sandhu had to stretch back to palm over a deflection.

On the counter, a Romeo placement off a Vishak Kumar throw-in hit the upright in the 51st minute and then in the 55th minute, Manandeep Singh’s long-ranger sailed over.

But the Indians regrouped fast – Alwyn George capitalising on a defensive lapse, chipped it over an onrushing Garayev. Alwyn could have settled the issue in the 71st minute when he ran in between the entire defence and entered the rival box only for Garayev’s legs to deprive him.

It didn’t matter as Romeo got his name on the scoring sheet for the second consecutive match in the 76thminute. This time, Alwyn provided the perfect supplier for him and Romeo made no mistake.

The second penalty came in the 85th minute when Jeje was pushed inside the box and Jeje gleefully converted from the spot.

For the rest of the match, the Indians maintained their shape. Turkmenistan did try to press hard but it came a bit too late.