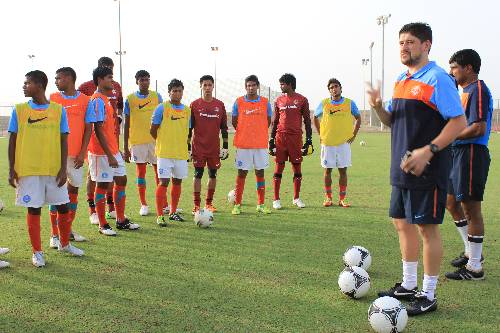 India u-22 bowed out of the AFC u-22 Championships (Q) after a heartbreaking last 45 minutes where they conceded 4 goals, till then they were in a race to qualify. However, the team has earned accolades not only from Indian fans, but also from rival coaches and football experts. After 5 tough matches, India managed 2 wins and a draw, which is no small achievement. Indian Football Network talks to Indian u-22 head coach, Mr. Arthur Papas, whose boys have brought fresh optimism regarding Indian football. In this exclusive interview, Arthur Papas talks about the positives of the tournament, disappointing result in the last match and his future targets.

Somesh Upadhyay : After a great show throughout the tournament, the 0-4 loss in the last match was completely unexpected. What do you think is the reason?

Arthur Papas : This was always the type of game that could become very open due to the nature of the type of result that was needed to even have a possibility to qualify for either nation, a different type of game with many variables which affected the flow.

Going in at half-time, I felt we had coped with the initial pressure placed upon us by Oman, and then from the 25th minute to half time had then started to gain more confidence, control as well as creating a couple very opportunities. At half-time we discussed the first 15 minute period of the second half as being the critical time to ensure we stayed in the game because after this Oman psychologically would have been dealt a blow. Some areas we had covered as well regarding our organisation and how to keep improving our ability to retain possession.

Unfortunately, the second half was the type of half when everything that could go wrong did both collectively and individually and this happens in football at even the highest levels and there are many reasons for this. We don’t need to look further than the recent European Championships Final which also resulted in a 4-0 scoreline to gain some perspective, by know way does this mean Italy all of a sudden became a poor team but on that given day the opponent proved too good and like us could not come up with the correct solutions to solve the problems.

Somesh Upadhyay : Was it the intensity of the occasion that the boys could not handle? What went wrong?

Arthur Papas : First of all the players are not to blame in any way, this is not my style at all and I’m proud of what they achieved. Every single player in every game and every training session shows a commitment and desire very rare from my coaching experiences. You have to always pay respect to the opponent though and Oman I had stated even prior to the game for me possessed the most gifted individuals of any team in this tournament. Does this mean they were the best team? No. But what does it does show is that when some of their players are given too much space or time they can be very damaging.

From a development perspective this game is a very important experience for all of us and it shows how important it is for our young players to keep being placed in situations where the pressure is much higher. Only by going through moments like this can they be able to develop this type of element to their identity because last night we had a game where the real details are exposed because there was never a moment where the players could relax or lose concentration, the second you did you got punished!

Somesh Upadhyay : We have conceded goals in all the matches. Is that something we can really improve on?

Arthur Papas : Of course we can improve on this aspect for sure. Firstly, I am never happy to concede a goal no matter what the scoreline is but then as a football country we need to start asking are we conceding goals because we don’t work on defensive structures or are we conceding goals because of our inability to maintain ball possession. It reminds me of the saying “an ounce of prevention is worth a pound of cure” meaning it’s more efficient to prevent the problem in the beginning, rather than let it go and have to invest a large amount of effort to fix the results later.

Therefore, for Indian football to take further steps forward in the future there needs to be continued development of the technical and tactical characteristics of the players. This is why the AIFF Academies are so critical because in the future the identification and training methodology is centred around developing more all-round proficient players.

Somesh Upadhyay : We came to the tournament as underdogs but proved our mettle. Are you happy with what we have been able to achieve?

Arthur Papas : When you get this close to qualification there is something inside you initially that can’t help but feel disappointment when reflecting. When you see your boys in tears after the game there is something wrong with you if you can’t share this pain because I was privileged to learn first hand how proud these players are to represent India.

Overall, yes I am content that the perception of this Indian team has changed in regards to what opposite nations expect when they play us. That we were able to give international debuts to six new players who all have really bright futures. That we were the lowest ranked nation by some distance and only in the last 45 minutes of the tournament did we concede the prospect of qualification. That we scored 11 goals in 5 matches in the so called group of death. Also, we did all this in minimal time and whilst implementing a new style of play which was completely foreign to this group of players only one month ago!

On a personal level am I ever satisfied? No, I explained this to the group last night because I place a lot of pressure on myself, and I was able to explain that this is also the reason I was so demanding of them because in my life too many times I have been told that something is not possible and I use this to strengthen my resolve to keep breaking down barriers. As a group we all evolved together and it has been a wonderful experience because at the end of the day we are better today then we were one month ago both as people and in football.

Somesh Upadhyay : What are the positives we are coming back home with?

Arthur Papas  : A greater understanding of the areas we need to keep working on to become even more competitive in Asia because at the same time Asia as a whole is rapidly improving, so we need to maintain progress and close the gap.

Specifically, we did show we can compete with very strong countries for the majority even right now. Moving forward we need to learn from this tournament to keep developing our own Indian football style because this in the long-term is what will provide the framework for success. On an individual basis we have also been able to learn more about some of the talented youth players we possess and I am very confident it will not be long before we see some new names popping up in the National Team which is really what the ultimate goal was from this tournament.

Somesh Upadhyay :  The team and the whole support staff have given the present generation Indian Football Fans arguably the most wonderful week ever. I thank you on behalf of everyone. What do you have to say to the readers of Indian Football Network and the fans?

Arthur Papas  : On behalf of the whole U22 Indian National team I would like to reciprocate our gratitude to all who have supported us over the last month, it’s all very much appreciated and has also highlighted how insightful and passionate the Indian football fan is, long may it continue.

Again on a personal level, it has been a whole new experience for me it has confirmed the enormous amount of potential that exists within Indian football. I have learnt so much about the culture & values and they are something that really resonate with me as a person which is why I was able to establish such a strong rapport with the playing group.

From here we now turn our attentions to the Pailan Arrows in the I-League and I am genuinely excited about what lays ahead when you consider 17 of the 23 players at the tournament are also part of that squad. We will have much more time to work on many aspects of our football style and also be able to scrutinise the individual habits of our players to a greater degree. All with the aim of improving them to be able to play at a higher level.

Exciting times lie ahead for all of Indian Football! Jai Hindi!