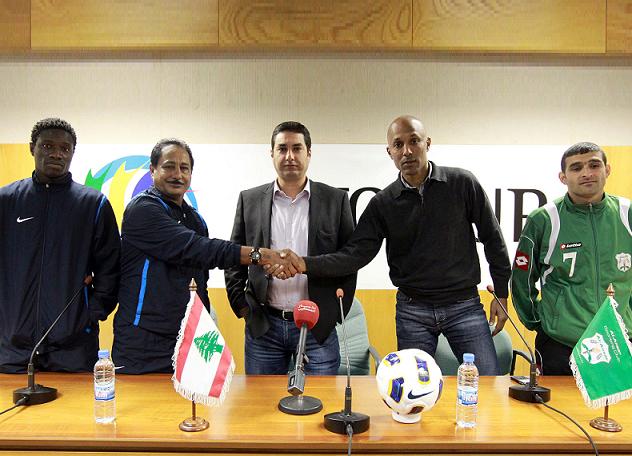 The stage is set for an exciting second round encounter of the AFC Cup 2011 when the Dempo SC of India will take on Al Ansar of Lebanon in Sports City Stadium of Beirut at 5:30 pm local time (21:00 IST). In the joint press conference held here in the conference hall in Sports City, Dempo coach Armando Colaco said, “I’m happy in Lebanon, particularly in the hospitality of Ansar , we have encountered a small problem related to the residence but the management of Al Ansar responded quickly to us,  they took us to the hotel. Everything’s positive and we are positive that we will match the expectations of our supporters. ”

Mr. Colaco further added, “Our team has considerable experience in the  AFC Cup, this is the fifth time in which we participate in this competition, we have come to Lebanon to provide a good match and we will seek to win. Our team includes four foreign players, including a Nigerian and a Brazilian, and we have six players from the Indian national team, and we will try to exploit the opportunities to register a win. ”

The home team coach Alonsargamal Taha said, “The result of our match with Nasaf of Uzbekistan has been harsh, and this requires us to exert more effort and sweat as compensation, and the most important thing for us tomorrow is to win three points. Domestically, our team is on the rise, and we played well in the last two weeks and we have 6 points in the last two games.

He added: “As for the players, we have no injuries, but midfielder Rabea Ataya will miss the match in the pretext of suspension for being sent off in the previous game after being awarded two yellow cards in a row. Yet we will strive to provide a good match and a strong performance worthy of the name the club, particularly as we face a strong and balanced side”.

The chairman of Ansar, Nabil Baalbaki said, “Although we lost in front of Nasaf 0-3 owing to the difficult circumstances in which we passed in Uzbekistan, we were in a state of physical and technical supremacy there. We have prepared well for this meeting. We have a number of young people who do not have the experience in AFC Cup, but they are determined to play well”.

The organizers are hopeful about the fans’ response to the game and expect a great crowd in spite of the fact that the broadcasters have not done enough marketing and the game is on a weekday.

We at the Indian Football Network are expecting the Dempo SC to continue their recent 7 match unbeaten streak and register a convincing win. Voice your opinions on our forum and lend your support to the Indian team.