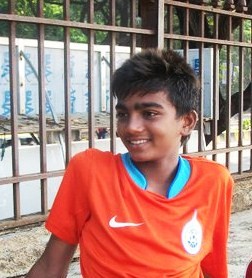 Pratik Shinde, the 15 year old teenager, who became the youngest Indian to sign a football contract abroad when he was called up for Galveston Pirate Soccer Club in US Soccer League, has finally succeeded in getting sponsorship for his travel to US.

Earlier we had reported, how inspite of getting this golden opportunity, Pratik was facing a big financial obstacle of not getting a sponsor. To help this youngster, Pirate SC coach, Mr. Brendan Keyes, agreed to provide him full support for his stay in US. But Pratik was still unable to secure financial support for his travel tickets to US. However, after we had published his exclusive interview, few more articles about his situation was published in newspapers and other websites. Eventually  his story was covered in television when IBN Lokmat, a top Marathi news channel, covered his news.

Pratik’s struggle attracted attention among many Indian football followers and players. Many fans expressed their desire for helping him. Eventually, Buldana Urban Co-Operative Society Ltd., stepped up to help this talented midfielder. Buldana Urban Co-Operative Society Ltd. has assured Pratik that they will take care of his tickets, visa and insurance costs. This comes as a big boost to him as now he can now concentrate on his football and stop worrying about not being able to make most of this opportunity. After securing this sponsorship, Pratik now wants to work ven more harder to keep the faith and support shown by his coach, sponsors and football fans across nation. Pratik is extremely thankful to his mother, Galveston Pirate SC coach, Mr Brenden Keyes, Buldana Urban Co-Operative Society Ltd., IBN lokmat and IBN lokmat correspondent Miss Priti Khan. He also thanks all the football lovers who approached to help him, prayed for him and promoted his news at a time when the whole country is lost in the euphoria of the ongoing ICC cricket world cup.

Finally, Pratik thanks Indian Football Network for spreading his news for the first time. We also would like to wish Pratik all the best for the times ahead. We promise that we will keep a track on his progress and would keep informing about him to our readers.

Related Articles on the same topic :