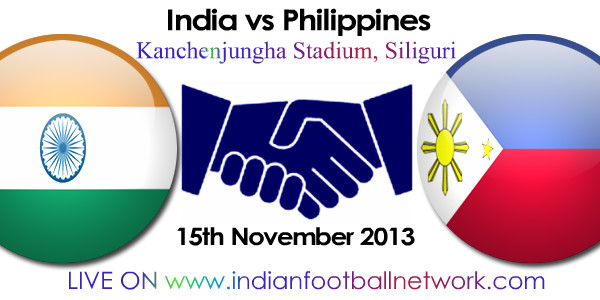 The Kanchenjunga stands tall. As the Sun shines, the snow-capped peak changes its colour. It’s Golden in the morning, white during noon and golden again from late afternoon. Kanchenjunga Stadium turf, all green, watches.

The hustle and bustle of West Bengal’s Commercial Capital will captivate you for sure. There’s so much nearby. The Highway says Darjeeling is 90kms away. If you drive 5kms you’ll land up in Tea Gardens – perhaps, a Garden which produces the World’s finest Tea.

At the pre-match Media Interaction, India’s Dutch Coach Wim Koevermans and Philippines German Coach Micheal Hans Weib sit next to each other. “We appreciate Philippines coming over to play, especially during difficult times,” Koevermans stated.

Welcoming the Philippines contingent, Indian National Captain Sunil Chhetri added: “Our Heart goes out to all who unfortunately succumbed in Typhoon Haiyan. Our Prayers continue so that everything comes back to normal in your Country.”

A minute’s silence will be observed prior to the kick-off of the International Friendly on October 15 as a mark of respect to all who passed away in the Typhoon.

“We are taking this match as part of our preparation for the Challenge Cup and also to pay tribute to all who died in the Typhoon,” James Joseph Younghusband, who had scored a brace when the two Teams last met in the SFC Challenge Cup in Kathmandu, informed.

“I’ve had a look at Team India videos and am aware about the progress which Indian Team has made since March 2012 when we last played them. We watched the SAFF Championship Final and know India play a very high intensity. They are an aggressive Team,” Hans Weib pronounced. “It’s difficult to predict the result but we aim to win high.”

“We didn’t win the SAFF Final, a match which we deserved to win,” Koevermans stated. “When I took over as the Indian National Team Coach I had stressed on playing on as many FIFA dates as possible. We could have easily picked up any other weaker opposition but we intend to play against stronger Teams,” he added.

Curly-haired Clifford Miranda who missed the SAFF Championship due to an untimely injury sprints down the flanks and essays those trademark curlers. “We need to stick to the instructions and give our best. We need to believe in ourselves,” he adds.

Chhetri informed the “fresh faces” have settled in fast. “The best thing about FIFA dates is that you get to play good opposition. It is a learning process for all. The fresh faces are eagerly looking up to the match. We don’t have any injury concerns and are raring to go,” he quipped.

Koevermans, however, didn’t buy the logic his Team is an “inexperienced one.”

“Look carefully and you will find experience all over. International Football is always played at a different tempo. The first practice session at the National Team Camp is of much higher intensity that what you normally have in your Clubs. The boys have responded well and I look forward to their response in the match,” Koevermans maintained.

In between the breaks at the practice session, Narayan Das, who have earlier donned the India U-22 and India U-19 Colours, listens carefully. “Earlier when I used to be in age-group Camps, we looked up to all in the senior squad. Now I’m practicing with them, staying with them. When you have the best around you, you learn more,” he pronounced.

There’s a chill in the air, especially early morning and post sunset. “It’s the perfect weather to play an International match. There will be a bit of dew on the grass. It’s just perfect,” he said.

The list of Philippines’ squad of 23 will tell you that seventeen of them were born outside Philippines and possess Dual Citizenship including Bundesliga Club Eintracht Frankfurt defender Stephan Markus Schrock.

“Unfortunately we can only field Indian born Players,” Koevermans smiled.

The kick-off at the Kanchenjunga Stadium in Siliguri on Friday (November 15) is at 6pm.