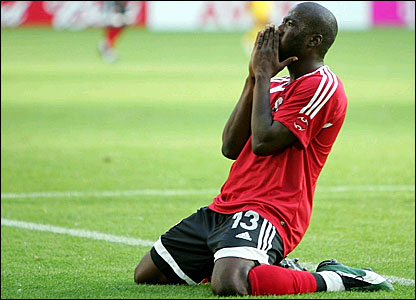 Cornell Glen is a regular for Trinidad and Tobago since 2002, with 66 international caps and 23 goals to his name.

Glen was also in the squad for the 2006 FIFA World Cup, where he appeared in all three of Trinidad & Tobago’s games at the premier event in Germany. His shot nearly upset Sweden in the Caribbean team’s historic World Cup debut which ended in a draw. Trinidad & Tobago were eliminated in the first round after losing to England and Paraguay, but Glen’s performances during the tournament earned him praise and recognition.

Glen’s impressive run with San Juan Jabloteh dominated the TT Pro League, leading the club to two consecutive league championships in 2002 and 2003, while registering 12 and 26 goals in the respective seasons paving him a way to MLS Metrostars and there upon to other MLS clubs including LA Galaxy,  FC Dallas, The Columbus Crew, The Colorado Rapids, San Jose Earthquakes and so on.

With this signing, Glen will be the first MLS player to play for an Indian football club.

Before his signing with Shillong Lajong, he was with Trinidad and Tobago’s top-level TT Pro League Club Caledonia AIA.

Larsing Ming, General Secretary of Shillong Lajong Football Club said “We are pleased with the signing of an experienced player like Cornell Glen. I hope that Glen will gel well with the rest of the team and we look forward to him joining us and help the team put up a competitive performance in the upcoming I League”.

The star striker commented on the signing and said, “Shillong Lajong FC has always been one of the well known Clubs from that part of the World (India) and to get an opportunity to play for them would be such an honour and something that would give me immense pride, more so if I could help the Club do well in the League”.