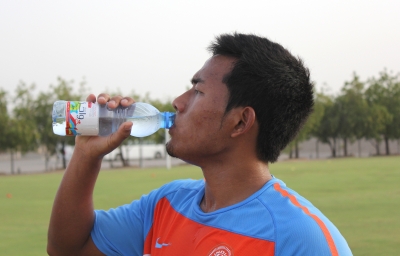 Dempo’s pursuit of highly rated Indian striker Jeje Lalpekhlua came to an end after both agreed for a deal over two years.

Having come through he ranks of Pune FC, the Mizoram born striker enjoyed an impressive season with the Red Lizards. 22 year old Jeje scored 5 goals while being a key member of Derrick Pereira’s side as they finished second in the I-League last season. In 2012, he led the Indian U-22 team which participated in the AFC U-22 qualifiers at Oman. He was also one of the Indian players who were called for trials at Scottish Club Glasgow Rangers in 2011.

The signing of Jeje will add new dimension to the forward line of Dempo SC consisting of Billy Mehmet, Joy Ferrao and  Myron Fernandes. It will give Coach Arthur Papas various options to change the formations during attack. A technically gifted player, Jeje has the pace, agility and playing style which will suit more to the plans of Arthur Papas.

Sharing his excitement upon joining the club Jeje said “It is Dempo where I used to dream of playing .I was excited when i got a contact for Dempo, it was like a dream come true for me. I think I will learn a lot and prosper under their new coach. I am eagerly waiting to join the club”.

The striker is keen to perform under Papas and wants Dempo SC to win the I-League next season.