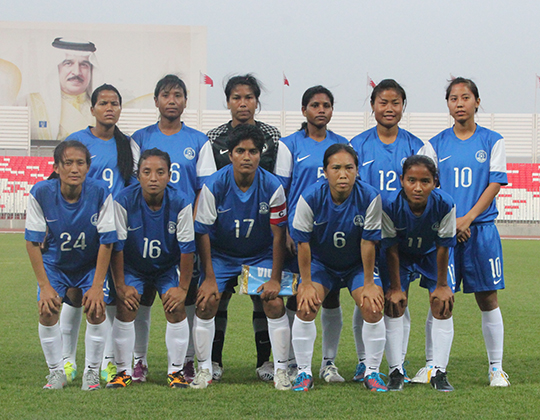 RIFFA: The Indian Women’s Senior National Team started their quest to qualify for the AFC Women’s Asian Cup next year in style by getting the better of Bahrain in their own backyard here at the National Football Stadium on Tuesday (May 14, 2013).

The match – first of the two Friendlies against the same opponent – ended 2-1. Pinky Magar and Kamala Devi scored for India in the 8th and 36th minute respectively. For Bahrain, Reem Yusuf halved the margin in the 42ndminute.

In took just eight minutes for the SAFF Cup champions to unlock their rival’s rearguard, striker Pinky Magar stabbing home from a rebound off Sasmita Malik’s effort that hit the horizontal.

India doubled their lead in the 36th minute. Kamala Devi doing the needful this time from close after Malik once again crossed perfectly into the danger area from the left.

The hosts pulled one back out of the blue when a free kick from the edge of the box struck Ashalata Devi’s hand inside the box. Striker Reem Yusuf converted from the spot.

India had launched an attacking offensive from the first whistle with repeated forays on the hosts’ goal. The strike-duo of Pinky and Bala Devi combined well up front.

Malik had a game to remember. Not only did her pin-point floaters lead to the two goals, the darting runs down the left flank gave the Bahrain defence a harrowing time.

In the middle of the park, former India Captain Bembem Devi was a class apart. The most experienced player for India engineered virtually every move with her ability to shimmy though thickets coming to the fore on most occasions.

The sight most common in Friendlies was seen minutes into the second half as both the Coaches ringed in quite a few changes. With a place up for grabs in the all-important AFC Women’s Asian Cup (Qualifiers), the fresh legs were at it from the word go.