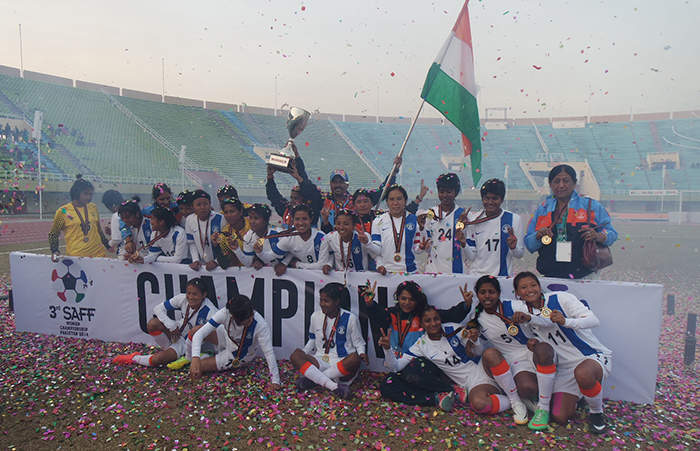 NEW DELHI: India Women’s National Team made it three out of three in the 3rd SAFF Women’s Championship as they made short work of Nepal with a clinical 6-0 win in the final to clinch the crown for the third straight time, here in Islamabad, Pakistan on Friday (November 21, 2014).

This is the first time that India have won on Pakistan soil.

“Congratulations Girls,” he said in his message. “This triumph in Islamabad shows that there’s no dearth of talent as far as Women’s Football in India in concerned. All of you make us proud. Congratulations to all the Players and the Support Staff,” he stated.

“The Senior National Women’s Championship conducted earlier this year opened up the pool of talent and the results are evident. We now look forward for Indian Women squads to further make an impact at the AFC level.”

Bala Devi took her tally to sixteen goals – the highest scored in a single edition of the championship – finding the net four times with Kamala and Prameshwori Devi also getting on the scorsheet.

Nepal who have been India’s companion in the finals on all three occasions tried to put up a stiff resistance in the opening stages but were breached just after the first quarter with Kamala latching on to a neat pass from Prameshwori to break the deadlock.

Nepal got all their force to man the backline and bottle up Bala in particular. But goal-machine from Manipur soon got on the act with a delectable volley in the 39th minute only to double her tally one minute later. It was 3-0 at halftime.

India showed no mercy on their familiar foes post the breather with the final score reading 6-0. There was no stopping Bala as she completed her hattrick from close range at the start of the second half, also stabbing home her fourth at the death this time from a Premi Devi through ball. In between Bala’s exploits, Prameshwori curled one in from the top of the box.

Just to measure the extent of India’s supremacy in the tournament, the 53rd ranked team plundered a total of 36 goals in the five matches they played, conceding only once against Bangladesh.