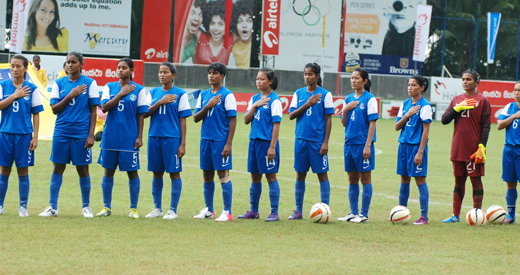 Having already booked their place in the semi-finals, a relaxed Indian Women’s Team simply toyed with an out of sorts Bhutan outfit in their last group engagement of the SAFF Women’s Championship in Colombo on Tuesday (September 11).

The goal fest started as early as in the 14th minute when West Bengal’s Tuli Goon found the back of the net. There was no stopping the defending champions from there on. Pinky Bombal’s hattrick and Parmeshwari Devi’s brace highlighted India’s superlative recital on the day.

Bhutan were wary of India from the beginning playing defensive football, but Oinam Bem Bem Devi and co capitalised on that and attacked mercilessly. Such has been India’s performance so far that not only have they won all three of their matches but also managed to keep a clean sheet throughout the group league.

India play their semifinal on September 14.