Wellington Phoenix FC, a New Zealand based club which plays in top Australian league, the A-League, has arrived in India with a 20 member-ed squad for ‘The North East Lajong Super Series’ against I-League clubs – Shillong Lajong FC and United Sikkim FC. 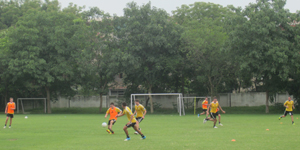 Wellington Phoenix arrived in India on the 19th of August, having a practice session on 20th from 11am to 12.30pm. They had a few training drills, testing everyone on the hard surface and extreme heat in the middle of the day.

Wellington Phoenix will be arriving in Shillong on the 27th of August.

Although many of the first team players won’t be traveling with the team, the squad still boasts quite a few experienced players. Many players have represented their national team like Glenn Moss, Tony Lochhead, Michael Boxall, Andrew Durante, Leo Bertos, Jeremy Brockie (New Zealand), Manny Muscat (Malta), Paul Ifill (Barbados) and Benjamin Totori (Solomon Islands). Paul Ifill has huge experience, having played with English clubs like Millwall, Sheffield United and Crystal Palace among others. Following is the list of 20 players –

Meanwhile, United Sikkim FC has announced the squad for this triangular series. United Sikkim has named three foreign based player in their squad, apart from that ex-Indian football captain and United Sikkim founder Bhaichung Bhutia is in the squad.

The squad is as follows –