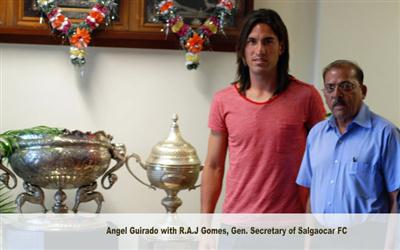 Philippines international Angel Guirado has completed his move from Global FC, Philippines and has joined hands with Salgaocar FC for the upcoming season.

The 6’ 2” Spanish striker has already put the finishing touches to a one-year deal with the defending Federation Cup champions and has been identified as one of the candidates who may score the maximum number of goals.

“Angel is a tall player with good physical presence and competent skills; he will give me lot of options as a striker” said Karim Bencherifa, Head coach of Salgaocar FC.

Angel Guirado was born to a Filipina mother in Malaga, Spain. Owing to his ancestry, he has represented the Philippines at the international level several times, the most recent being in the AFC Challenge Cup held at Kathmandu, Nepal in March 2012 where he scored two goals in the tournament.

Angel Guirado started his career with Malaga FC Juniors in 1997 and progressed to play with Athletico Madrid B (2005-06) and Deportivo de la Coruna (2006-07). After having featured with Spanish 2nd and 3rd division teams he made his move to Global FC, Philippines in 2011.