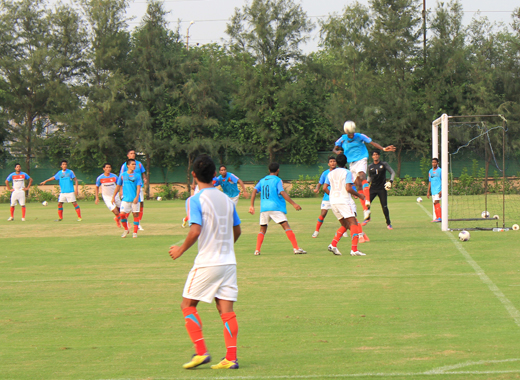 GREATER NOIDA: “Top quality, guys” that’s what Indian Senior National Team Coach Wim Koevermans yelled almost all throughout the 90 minutes practice session at the Jaypee Greens on Friday (August 17). This was his first practice session in Delhi/NCR after being based in Bangalore for almost a fortnight for Nehru Cup preparations.
As the boys sweated it out, the Dutchman was in no mood to compromise. His attitude was infectious enough – from Syed Rahim Nabi to Subrata Pal to Gourmangi Singh to Sunil Chhetri to the U-22 players Milan Singh and Alwyn George amongst others, the boys stayed ever willing to give that extra bit on the lush green field.
“The boys are much better than what they think they are,” Koevermans maintained later. “We are on the right track and the atmosphere in the camp is good. Everyone is working hard,” he added.
The Senior Team which had played a practice match against Bangalore XI during their Preparatory Camp in the Garden City will be taking on AIFF’s Developmental Team Pailan Arrows on Saturday. The kick-off is slated for 4pm.
The session was Friday was divided into sessions. If the boys started off with match related basics, the day ended with a practice match between the boys.
Speaking on the sidelines of the first day’s practice, Nabi stressed: “Wim has been insisting on building up from defence. I have been with the National Camp for long but some of the tips as far as positional sense is concerned have been an education for me.”
Nabi also ushered lavish praise on U-22 midfielder Alwyn George. “Mark my words, he is a special talent. He has it in himself to be one of the biggest stars of the future,” he added.
Alwyn added: “I have been learning a lot. The U-22 stint in Muscat and my experience in the National Camp under Koevermans has helped me immensely.”