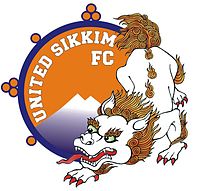 A mere 15 month old club has made it to the elite league of Indian football. A record, an achievement that will make anyone go mad. But it is different for the iconic Bhaichung Bhutia. Proud he is for what his boys and management have achieved. But for him the job is not done yet.

Reaching the I-league top division is just the first step

Indeed it is first step towards the goal of achieving the massive and ambitious target that Bhaichung has set for his brainchild United Sikkim FC (USFC).

I want to make USFC a model club for Indian football. We will have a stadium, an academy and our own practice pitches.

He wants his club to promote local talent. He believes there is no dearth of talent in Sikkim and the academy they are planning will bring the best out of those talents.

Festive mood has set in in Sikkim with the qualification of their club. The state government is also quite supportive. On the day of the final qualification match, the Chief Minister of Sikkim Mr. Pawan Kumar Chamling was present to witness it and had declared it a state holiday. A massive crowd of 15,000, never heard before in the 2nd Division league, filled up the stadium.

People of Sikkim are very passionate about football. But there was no club to support. Now they have one