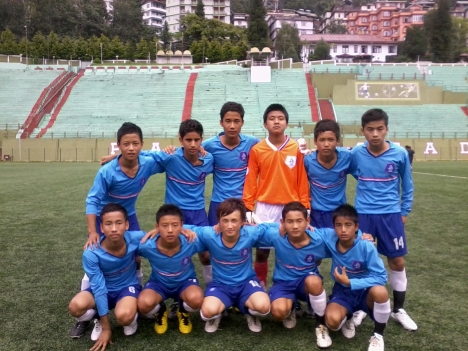 Sikkim State League(S-League 2nd Division) is on at the moment in Paljor Stadium, Gangtok with twelve teams participating from across the state and the team which caught my fancy is the Gram Vikash Sangathan Football Academy. Gram Vikash Sangathan is actually an NGO based at Central Pendam which falls in East District which floated its own Academy in 2008 as an extension to the host of other social welfare activities it conducts.

The President of this organization is Gangaram Guragai and the manager is Karma Jigmee Bhutia who informed that the GVS football Academy was started in February 2008.It was an initiative by a group of like minded individuals and today they have 25 students selected from the rural areas of Sikkim during the winter camps they used to organize every year. All these 25 boys study at Cental Pendam Senior Secondary School and practice at the school ground which has been provided to GVSFA by the School management. Their intention when they started off was  just to attract kids towards football but due to the positive response from the kids, parents and GVS they decided to go ahead with the Academy.
The GVSFA’s technical team is headed by two coaches Michael Lepcha and Bharat Tamang,both of this gentleman are Santosh Trophy players and have deep passion towards the game. These boys train under the watchful eyes of the two coaches every morning and afternoon. The Academy also provides these boys with decent accommodation and food. The Cental Pendam Senior Secondary school has been very supportive towards GVSFA by providing them the school ground and the recruits also are given direct admission into the school.
After three winters of coaching these boys have shaped up well and are currently participating in the S-League second division which shows that the efforts of collective labor is bearing fruits slowly. The GVSFA boys had a bright start in the second division when they won the 3-0 against Lower Arithang FC but lost 1-4 against physically superior FC United FC Jorethang. But GVSFA is still a work in progress and in future we can surely expect these boys to rise up and play for the big clubs of the country.
The coach Michael Lepcha explained the situation saying that these boys are still young and lack match experience and are under 16 years of age. They have not played many competitive matches and now they are playing in the second division State League the coach further added that the boys will learn and grow after every match.
Michael Lepcha is a Sports teacher in Sajong Junior High School, 1 km away from Central Pendam and holds a Diploma in Football Coaching from SAI Centre in Kolkata. He is a very well known name in the Sikkim football circles and was a wonderful Right Winger in his playing days. He got associated with GVSFA this year after joining GVSFA and is determined to turn these boys into good footballers in future.
The GVSFA plans to give all their support to these boys and also provide them with a launch pad through which they can go on and play for the big clubs. These boys have been divided into two age groups U-14 and U-16 to give them proper attention during training. The later group of boys is currently representing GVSFA in the second division S-League. The parents of these students have also been very cooperative and helpful as they pay Rs 1100 per month as a fee without any complains and the rest of the expense is taken care by the GVSFA which comes to around Rs 2200 per player.
Gram Vikash Sangathan Football Academy has given a new hope to football in Sikkim and it’s a joy to watch these boys taking on stronger opponents during there matches.I am sure many boys from this Academy will go on and play for the big Clubs of the country in Future and many more Bhaichungs,Sanjus and Nirmals will be produced from the state of Sikkim.Salute to all the individuals involved with this wonderful project.