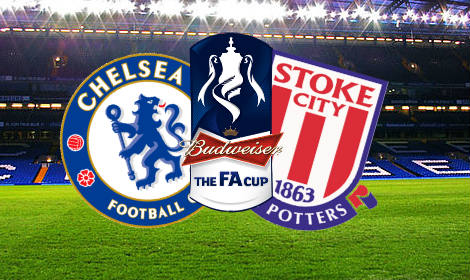 To watch Chelsea vs Stoke City live stream free ronaldo7 justin tv FA Cup online link is given at the end of the article.

When Chelsea FC host Stoke City at home tonight n the FA Cup 4th round match, they would certainly seek revenge of the reverse fixture, albeit in EPL, where they lost 3-2 against The Potters in December.

But lightning strikes rarely at the same place twice and Chelsea have been upwardly ever since that defeat, beating Liverpool and Manchester United on the way and a total of six consecutive wins.

The most recent victory of The Blues saw them trounce Man United 3-1 helped by Samuel Eto’o hat-trick where we some of the class that Eto’o was known for. Stoke on the other hand have struggled since their win over Chelsea and have won just two matches out of nine; those two came at home.

Chelsea vs Stoke live streaming link is at the bottom of the article.

Chelsea manager Jose Mourinho is wary of their opposition, particularly their physical style of play, which is why Mourinho thinks they lost to The Potters last time.

Demba Ba and Oscar are likely to lead the attack while Chelsea would like to go for an open play and Stoke would defend and rely on counter-attacks. An upset is quite unlikely, considering Stoke don’t even have the comfort of their home, apart from their poor form being another reasn.

Fernando Torres is out due to a knee problem while Juan Mata has changed the shirts and would not feature either. Asmir Begovi, who had broken his finger, is likely to make a comeback for Stoke after being left out for six weeks. Robert Huth and Andy Wilkinson remain unavailable due to respective knee and heel injuries.