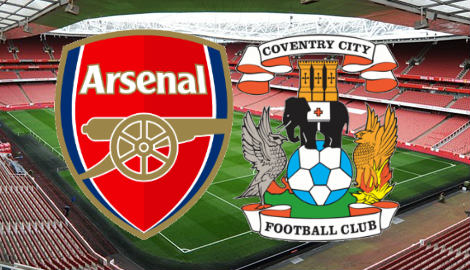 Arsenal will host Coventry City FC in the 4th round of the FA Cup at the Emirates stadium tonight.

This match is a complete mismatch with Arsenal leading the EPL table while Coventry City are 55th on the table literally.

This game being held at the Emirates stadium where The Gunners have lost just three matches this season in all competitions, Coventry have literally no chance.

With a challenge to hold the EPL top spot, it is likely that the home team will be rotating players ahead of the fixture next weekend. That seems to be the only respite for the visitors.

Mikel Arteta, Aaron Ramsey and Tomas Rosicky would not be playing in this match for Arsenal. Arsenal are certainly not taking this match lightly as they are eying on the silverware after their hopes were dashed in Capital One Cup.