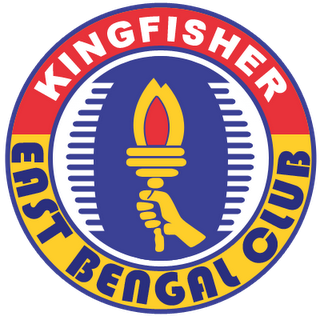 East Bengal had earlier trounced Shillong Lajong FC 4-0 and the hill station proved to be happy hunting grounds for them once again.

Gurwinder Singh put the visitors ahead first before Kim Song Yong equalised for the Blues in the first half. Malsawmtlunga then scored the winner deep into the second half.

Early possession was shared by the two teams with neither side able to score.

Manandeep Singh had the first real chance when RUFC earned a corner in the 27th minute. Munmun Lugun fired the ball in low to the near post but Manandeep’s excellent header went wide.

Both teams were playing well and it was the visitors who broke the deadlock first. Some poor defending by the Blues led to a free kick deep on the right flank. Perfectly taken, Gurwinder, on the left, was in a great position to neatly head the ball over Subrata Paul for the lead.

Besides the slip up that led to the set-piece, Rangdajied were playing well as a unit and their efforts were rewarded in first half stoppage time.

Lyngdoh took the ball up on the right flank and picked out Kim with a low cross. Running forward, the North Korean striker placed his header in the corner of the net to restore parity between the clubs.

East Bengal had most of the possession after the restart. They were attacking from the word go and even on the few occasions when the hosts got the ball, the Red & Golds quickly took it back and made rapid counterattacks that Rangdajied had to do well to thwart.

Cavin Lobo had one of KEB’s best chances with a good shot from the right, but the ball went across the face of the goal and out from a tight angle.

RUFC began to find their second session feet after 70 minutes, with Lyngdoh firing a long distance shot that just cleared the crossbar.

Errors began to creep into the games of both sides, however, and neither side looked really convincing.

It was at this point that Malsawmtlunga broke the hearts of the home fans with the third goal of the contest. Chidi took a shot on goal from well outside the box that moved in the air slightly, making it difficult for Subrata to collect. His fumble allowed Malsawmtlunga to tap in the ball for the easiest of goals.

Scrappy action between the two teams continued on, but Rangdajied were not able to find the equaliser, consigning them to their sixth defeat of the season.