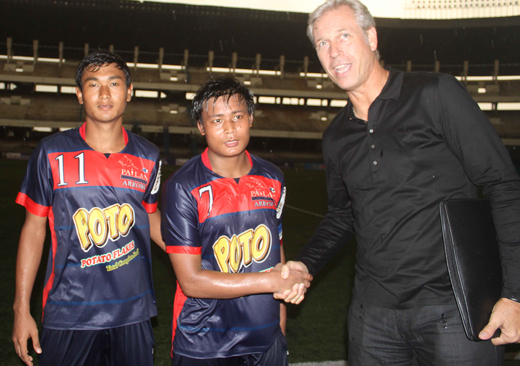 KOLKATA: Pailan Arrows played true to their promise as they downed Air India 2-1 to pick up their second successive win in the I-League at Kolkata’s Salt Lake Stadium on Thursday (October 11).

Striker Holicharan Narzary put the Arrows ahead in the first half before captain Milan Singh ensured the winner from a penalty midway through the second half. Nigerian striker Henry Ezeh pulled one back for the airmen.

The first half was generally staid with the action centred round the midfield. Both the sides took time to settle down checking their offensive designs. With Air India initially resorting to a lone foreign striker in Henry Ezeh, the attacks were few and far between. Arrows were also contained in their goal-ward moves and warmed up to a more open game late in the first half.

After Avinabo Bag had threateningly come close to scoring midway through the first half, Narzary found the decisive touch two minutes from the break. The Arrows’ prolific scorer finished a smart pass from midfielder Rajinder Kumar, who received a midfield floater outside the box and released the former with neat square pass near the spot.

Arrows began well after the break and showed more initiative in enhancing the lead. Both Narzary and his upfront colleague Alwyn George kept the Air India defence under pressure with their pacey runs. Air India found the equaliser in the 67th minute much against the run of play when Henry nodded home a nice chip from compatriot Elijah Junior, who came in as a 59th minute substitute. Arrows responded to the setback positively and reinstated the lead in the next minute. Before the airmen could complete their celebration the Arrows were spearheading a counterattack.

Alwyn George threatened to run aground the opposition defence making a fine solo run but just as young striker looked to break free into the opponent box, he was unlawfully challenged by the Air India defender Prem Kumar. The resultant penalty was scored by the Arrows’ captain Milan Singh with a deft placement thereby ensuring the full three points for the team.