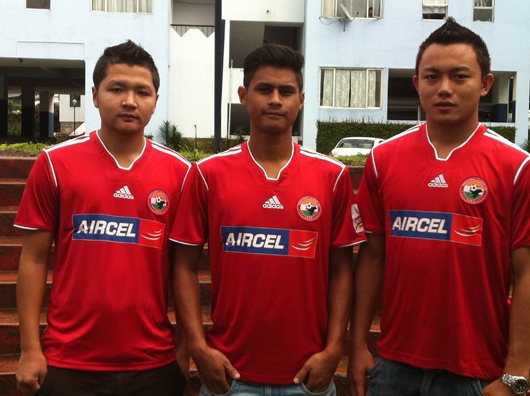 In what will be a first of its kind, three promising I-League players of Shillong Lajong Football Club, Eugeneson Lyngdoh, Lalramluaha and Lalthuammawia Ralte will be travelling to Denmark to undergo a training programme at a Denmark based club, FCV Vikings which is a famous name in the Danish 1st Division League. The announcement of this trip was made during the press conference which was held in Kolkata after Shillong Lajong FC entered into an agreement with Anglian Holdings Sports and Marketing, a Dubai based, NRI owned Multi National Corporation, which is the first FDI Investment in Indian Football, with diverse global investments.

The three talented boys will leave Shillong on Saturday, the 14th of July 2012 and will be in Denmark till the 29th of July 2012. They will have access to the best training facilities in football and will be looking to make full use of this international exposure.The trip will also serve as an exercise to gauge the standards of the Indian League players,as the three boys seek to gain valuable international experience from this once-in-a-lifetime opportunity.

In the last 2 years,Shillong Lajong Football Club has achieved a torch bearing feat of sending an astounding 23 of its junior players to foreign soil to train and play in some of the world’s best known clubs such as Manchester United,Inter Milan and Bayern Munich. However, the Denmark trip will be the first time that the Club is sending its I-league players abroad.

SLFC General Secretary Larsing M Sawyan, said that “the trip will serve as a platform to provide SLFC and its players an insight into European Club football and learn from the experience. We hope to conduct many such exposure trips in the future which shall include promising players, junior coaching staff,as well as managers and executives of SLFC”.

Shillong lad Eugenson Lyngdoh said” I am very excited about going to Denmark and getting the experience to play with international players.It will be a new experience,and i am eagerly looking forward to it.We have heard so much about European players,and to actually get to play alongside them will take my playing to a new level.It will also equipped me with better skills and knowledge to grow as a footballer”.

Lalramluaha added “I am quite excited and happy about the trip,as i will get to learn new things in good training facilities”.