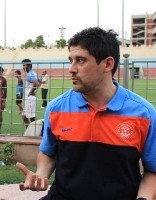 Yet another match, yet another great result for the Indian football team in the U22 AFC Championship Qualifiers. The last hurdle that we have to face is the host Oman itself. Enjoying home support, the team might be a tough nut to crack.

Apart from beating them, there is a lot of calculation remaining to be done. Is the team worried about it?

How are our boys recovering, having to play so many matches in short time?

In an exclusive post-match interview to Indian Football Network, Indian coach Arthur Papas talks about all this and much more:

Somesh: As per reports,  Turkmenistan started the game very defensively today and it was difficult to score. How did you manage to break that and pump in 4 goals?

Arthur: Actually it wasn’t that Turkmenistan began the game defensively, it was more due to a much more controlled start from us in which we wanted to settle as soon very quickly and were able to retain the ball from the outset, which in turn forced Turkmenistan back because they were unable to win the ball back. If I was to judge the game purely on performance then the first half today was our best half of football since I began with the team. Our build up from the back was well constructed, we were patient at the right times and yet still created many chances either from set-pieces or through open play. Also, we were able to get our full-backs much more involved in our attacking movements and this is an area we will work even more once we begin with Pailan. Balancing this our organisation was very efficient and this is why when we lost possession we were able to win the ball back much quicker.