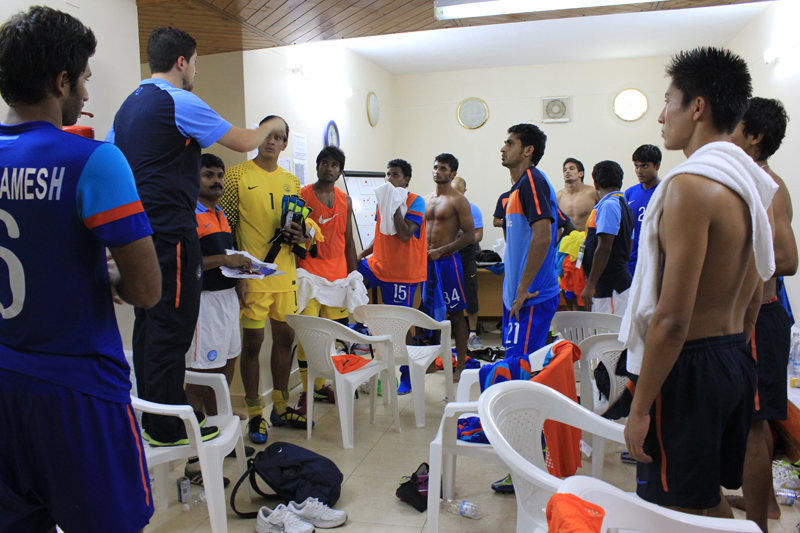 MUSCAT: “I had my doubts before coming here. But within three weeks I have been proved wrong. Much like the Australians, the Indians are a fighting lot,” commented Arthur Papas. “I’m happy to be proved wrong. India is a land of fighters. It’s in the culture. I salute my boys the manner they keep fighting till the final whistle,” Papas paid his tribute. That was on Thursday evening after India’s 1-1 draw against United Arab Emirates. Friday’s morning sun shines bright in Muscat. The plan stays to look forward or rather, as Papas puts it: “to sustain the momentum.” There’s no messing around. The support staff takes care of the bruises and the players have already started to believe. The training sessions are no more dull, the team meetings, no more yawning. There’s no waste of time – the Team Hotel looks a different Universe. Co-ordinated movement on and off the field has sunk early talks of a ‘fluke’ result. The thrill of a triumph in Footballing Philosophy – making stronger Nations cornered and getting them fearful, adds to the thrill of Papas’ boys. But therein lies the danger. “Turkmenistan stay a danger game for us,” Papas tells you. “Basking in past results is what good teams can’t afford. If we are starting to rebuild ourselves, we too need to walk the path.”

National Coach Wim Koevermans and Technical Director Rob Baan comes over and encourages the boys for their fighting spirit. For a bunch where the average age stays around 20, earning a headline stays a dream for all. And for them, Wim stays the key to a headline – earning a spot in the National Team Camp by impressing him. Alwyn George makes a comeback for the Turkmenistan match while Pranay Halder sits out, courtesy a double booking. “Alwyn’s availability will give us more options. We need to plan carefully,” Papas maintains, even as almost everyone in the Camp may have overheard him whispering notes about the Turkmenistan match to himself, almost immediately after the UAE match final whistle.

Papas is an honest guy. Not to deny there’s certain bit of childishness about him. He jumps in joy when his team scores and when the dressing room is small, he prefers to climb a chair for everyone to see him clear. But he teaches well and makes his wards think big. His philosophy has sort of re-invented Lalrindika Ralte. Papas insists, and Ralte goes beyond. Manandeep Singh stays a different flavour under Papas; Souvik Ghosh and Prathamaesh Maulinkar, a different mountain. Papas is not a stereotype; instead he stays someone who is willing to put all to test and fight against the pain to achieve. With 4 points from three matches so far, most would be tempted to field Jeje Lalpekhlua upfront. But this is Papas. “I need to use him intelligently.” Jeje stays willing to wait. “I will do what my Coach tells me to do. He has a plan for everyone and I am also a part of it. He has explained what my role is and I know it,” the Mizo striker proclaims, even as there are frantic calls from local Mizo fans to speak to Jeje and Dika. Souvik and Prathamesh, the two Central defenders who drew appreciation from all against Iraq and UAE, seem to watch, copy and learn from each other. The lanky Prathamesh has been invincible in the air and the nimble-footed Souvik, assured.

In between, General Secretary Kushal Das encourages all. “It’s heartening to see the squad working as a cohesive unit. There’s so much discipline all around,” he said, prior to boarding his afternoon flight back home. We prefer to roam around. In one of the rooms, you find Abhishek Das deep in meditation. You don’t disturb him and move next. A rhythmic tone greets you in Shaiju Mon’s room – he is sleeping. Jeje and Dika, the ‘Tom and Jerry,’ queue up for the ice-bath. A room ahead, Gurpreet is leading Manandeep in the Playstation. “You have earned respect from all,” Papas says in the meeting. “But respect for a footballer is fickle. We need to work harder to stay there,” the boys listen. “Sip, sip and sip,” Papas goes on. “Water intake has to be high.” It’s a must for everyone to carry a bottle with him whenever out. In less than three weeks of training, this bunch has changed a lot. The style of play is interesting, discipline noteworthy and the fightback, in Papas’ words, “much like the Aussies.” The kick-off against Turkmenistan at Sultan Qaboos Stadium on Saturday (June 30) at 5pm (IST: 6.30pm).