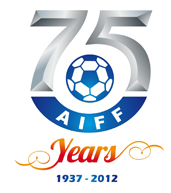 AIFF General Secretary Kushal Das looked back the path travelled so far. “It is a momentous day for all football lovers. The AIFF which was launched in 1937 is now 75 years old. We stay proud of our history,” he said.

He also stressed on the future plans ahead. “AIFF has big plans for the development of football specially the launch of Youth Academies which will go a long way in improving and developing the game in India,” he added.

AIFF President Praful Patel in his message said: “It is indeed a great occasion that we are 75 years old. I am sure that with the programme undertaken in the Platinum Jubilee year we will go a long way in creating the right impetus to take Indian football to the next level in due course.” 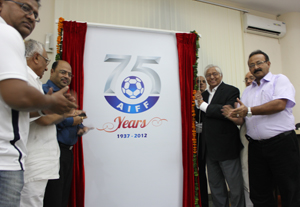 Goswami also lauded the AIFF over the recent appointment of foreign coaches. “I need to mention that AIFF has brought in quality coaching staff in all age groups. It’s up to the Indian Coaches who work with them to learn the finer points of the trade,” he commented.

A short documentary film, ‘Glory of Indian Football’ was also screened at the Football House.

The Military Pipe Band of Rajputana Rifles performed on the occasion. “Saare Jahan se Accha,” was played in honour of the guests. The AIFF staff were also present on the occasion.