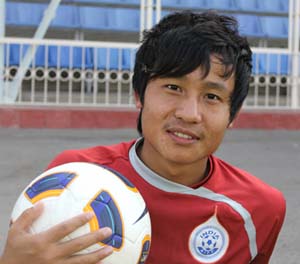 Uttam Rai is one of the 3 u16  players mentioned in the list. It is indeed a great achievement by Uttam to make into the list which features distinguished players and world class youth players like – Paul Arriola (US u17 World Cupper), Erik Heinze (Played in Germany u15), Daniel Garcia (who might soon make into US u20 team), Will Keane (Plays for Manchester United and England u21), John Lundstram (Everton FC Academy; England u17), Richard Sanchez (Mexico u20).

India u15, last year did decently in Dallas Cup, however Uttam missed out because of injury. This year he would want to make most of this opportunity. It will be a great opportunity for this Sikkimese to attract attention of scouts. Uttam has come long way since being discovered in Subroto Cup. He also won the best player award in IMG last year.

All Indian football fans will be pinning their hopes on Uttam Rai and his teammates to give some respect back to Indian football after the senior fared disastrously early this month in the AFC Challenge Cup.

Click here to discuss and know more about Dallas Cup,2012