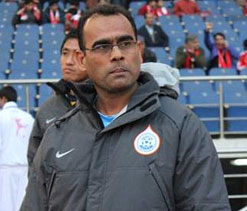 The curtain seems to be finally coming down over the Indian senior football team coach Savio Medeira. A disastrous AFC Challenge Cup campaign in Nepal meant the final nail in the coffin.

India were the AFC Challenge Cup champions in 2008 which led them to the Asia Cup in Doha. But the same team seems to be moving backwards under Savio. With a pathetic performance of 3 back to back losses, 8 goals conceded, none scored and ousted in the 1st round, the AIFF sees no point in continuing with him.

The contract with Savio runs till 31st May 2012 and AIFF will be honouring that as there are no commitments for the national senior team till that time anyway.

But in the mean time, Rob Baan has been asked to suggest names for the new coach and interview him. Rob Baan is the Technical Director of Indian football and has been appointed recently. He is mainly looking to develop the infrastructure and build a proper youth system.

As far as the coach for senior team is concerned, Rob Baan thinks that an Indian coach will be suitable for the team. He says that a coach from say Australia will train the team like Australians which may not be recieved well by Indians who have different physique and built.

In that case, Armando Colaco looks favourite to take the responsibility once again. Prior to Savio, Armando Colaco was the stop gap coach. The team under him showed remarkable improvement and they also managed to hold UAE in Delhi and beat Qatar in Doha. AIFF wanted to renew his contract but offered him only 1 year of extension.

Armando wanted a 5 year contract so that he can build the team afresh but was denied. Savio was hired and the slump started which cost us the AFC Challenge Cup and a berth in the AFC Asian Cup 2015 down under.

But Armando might be offered a long term contract this time as Rob favours an Indian coach and he looks to be the most suitable candidate who has a proven and remarkable track record. In any case if the AIFF goes for a foreign coach, Rob Baan will be given the responsibility to choose one.