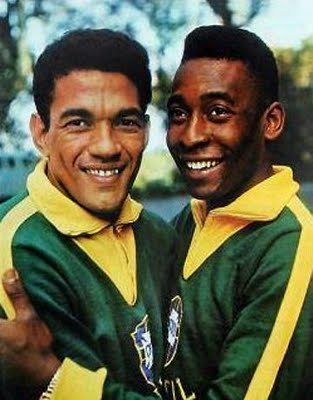 Calcutta, once the administrative capital, the mercantile and industrial heart of the British Empire, learnt football from the British, but traditionally are passionate fans of Brazil. Historical factors explain why in Calcutta (now Kolkata), there is this frenzied following for Brazilian football. This passion reached a crescendo during the 1958 World Cup, when the sublime skills of Pele, Garrincha, Dida and Vava mesmerized the opposition.

Till the mid-eighties, Brazil held sway. In the 1986 World Cup, Diego Maradona with his supreme dribbling skills helped Argentina win the World Cup. This was the first World Cup televised entirely live in India (in the 1982 World Cup only the semi finals and final were telecast live). Hypnotized by Maradona’s brilliance, Kolkata has divided loyalties since then, with the younger generation rooting for Argentina and others for Brazil.

This passionate support for both Brazil and Argentina has a strong anti-colonial tinge. In the psyche of the Kolkata fans both were visualized as third world countries overcoming European supremacy on the football field. Sympathy for Argentina seen as the victim in the 1986 Falklands War increased rapidly. The short passes and dribbling game of Brazilian teams of that era and Argentina (1986) was considered the poor man’s revenge against the organized scientific football of the Europeans. Players from Kolkata also tried to play football the Brazilian way. Players with exceptional dribbling skills were always popular in Kolkata. Garrincha, a tribal member of the Fulnios Indians, from a forest in north-eastern Brazil, exemplified the type of fantasy football, swaying past opponents and sudden change of pace the Kolkata fans admired. Dark-skinned, crooked legs, small in height, Garrincha was nicknamed “A joy of the people.”

Thus the frenzied following for Lionel Messi few weeks back is not surprising as Kolkata has a long tradition of supporting players with sublime dribbling skills. The organisers Celebrity Management Group (CMG) cashed in on this craze. Tickets were priced in the range of Rs. 700-10,000. CMG made over Rs. 7 crores from ticket sales alone, including corporate boxes sold for Rs. 7.5 lakhs each. ESPN paid Rs. 2.5 crores for telecasting rights to South Asia. The FIFA sanctioned friendly match, Argentina vs Venezuela was telecast live in 157 countries,a record for a game on Indian soil. So broadcasting rights was a major source of income for CMG. Sponsorship money was obtained from Kolkata’s hospitality-to-retailing major, Rose Valley Group, as title sponsor. Another city-based company, Emta Group and Pepsi Co, the only major company to do so, also sponsored the event. So from ticket sales, broadcast rights and sponsorship CMG had made an estimated amount of Rs. 16 crores from the international football match in Kolkata. The only disappointment was that Pepsi was the only major company to sponsor this match at the Salt lake stadium. Other leading Indian companies and multinationals shied away from this match, even though the World’s greatest footballer Messi was on show. This further shows that in sports advertising the Indian private sector is obsessed with cricket, not a good sign for other sports. After all if the much lauded Messi cannot attract sponsors then Indian football will struggle to do the same.