Kalimpong is a town and also one of the Sub-divisions in the Darjeeling district. It is a beautiful Hill station which offers pleasant weather throughout the year. Although the number of tourists visiting this town is not that significant. Kalimpong definitely has a huge tourism potential. 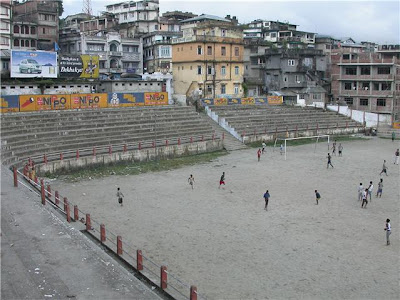 With a tag line which says “The ridge where we play” Kalimpong is also a very sporty town where the folks enjoy all kind of sports but football attracts the people of this town the most. It has a rich history of football with tournaments dating back to the 1930-40’s.Kalimpong has also produced plenty of talented footballers over the years and the school football scene is fantastic to say the least.

Football season kicks off early in Kalimpong with this year’s League already underway. There are two divisions. With Super Division having seven teams and the 1st Division with twenty one teams. The official name for the super division league is “R.B. Pradhan Memorial League” and the 1st Division is known as “Ravilal Lama Memorial League”. Both these gentleman were renowned people of Kalimpong. Ravilal Lama was a wonderful footballer of his times and was also good in boxing.

All the Kalimpong League matches are played at the “Mela Ground” which is at the heart of the town. The league is organized by the Kalimpong Sports Association (KSA) which has Urgen Lama (Mini),a former footballer of repute as the President. Although faced with so many hurdles like the lack of sponsors and good ground, the league is being run in an smooth manner by the passionate individuals associated with the KSA.

List of the participating teams in the Super Division 2011

The favorites to win the Super Division League are the Apex Club along with BMC Lions but Kalimpong Football Academy can spring a surprise, we cannot rule out the other teams too.BMC lions are a new team made up of students from BB Pradhan Management College. The team has two Bhutan International players and they have already become a crowd puller according to an official of the Kalimpong Sports Association. Scottish University Mission’s Institution (SUMI) is another team with students forming its backbone. This team is the traditional power house of Kalimpong Football; although it’s a school team they give tough competition to the Clubs. In its more than hundred years of history these school has produced thousands of quality footballers.

The league has kicked off on the 28th of May and will continue till the 21st of June. It’s amazing that with so many odds stacked against it the beautiful game still flourishes in Kalimpong, Its disheartening to note that there is no cash prizes for the winners of the League and they just play the game out of love for it, but when you have the passion and will nothing can stop you from achieving your goal and these players play in the hope that they will find brighter days in future. The new Sports Minister has promised many packages to develop sports in North Bengal. Hopefully “Poriborton” will also hit “The Ridge where we play”.