Nirvana FC Bodoland® is a football club based in Gossaigaon, district of Bodoland/Assam and currently plays the G.D.S.A. League at that place .

The word “nirvana” is  used to describe the perfect peace of the mind that is free from craving, anger and other afflictive states. Keeping this in mind the club was founded for promoting youth soccer in India that also helps as a means to deprive human body from the afflictive states. Also the team was not only playing football but they were helping enlightening the game to the others.
The chairman of the club, Mr. Jorden Brahma Wangdi along with a group of former players took the initiative towards forming a football club in the year 2003.

Nirvana FC Bodoland® aims to be one of the most successful clubs in Assam and the region. We also want to be professionally managed with strong youth development. 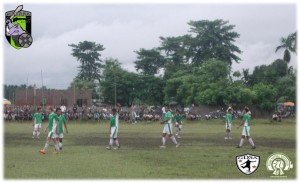 The main objective of the club is to promote the sport as whole, giving opportunity to local talented boys to show their skills, helping us to put the name of Bodoland and Assam in the map of the Indian football.
Our academy is responsible for training innumerable players from all over the country, and some of our ex-cadets were selected for trials abroad, getting the chance to play for clubs in USA, England and Thailand as well.
NFC is a club that helps the community, whose objective is to promote the game in the North East region and in the whole country as well. We have been working on various projects to uplift the beautiful game in the underprivileged community of Delhi and Assam; Goyla Allari and Paite Allari , both teams composed of underprivileged kids from the NGO Allari, and coached by Nirvana FC Bodoland® are perfect examples of our dedication towards the game and the community in general.
The club will be distinguished by its community mission of taking youths off the street and by its players, values of discipline, diligence, teamwork, collective responsibility, an excellent work ethic, camaraderie, sportsmanship and fair play.

Nirvana FC Bodoland® in partnership with Delhi’s based club Shastri FC®, are searching for U-15 and U-19 players interested to join us and play the upcoming Gothia Cup® in Gothenburg, Sweden, from July 17 to 23. The tournament is the largest and most international youth tournament in the world. Every year 1600 teams from 70 nations take part. We kindly request those who are interested about joining the club to contact as soon as possible our chief managing officer, Mr. Peter Zhekato. His contact number is +91 8860178828. We are looking forward to represent India over there, and show to the world our talent.