The Shiv Chhatrapati Sports City at Balewadi, the venue of the Commonwealth Youth Games 2008, has turned into a giant marriage hall for the wedding of Union Rural Development Minister Vilasrao Deshmukh’s neice. The weightlifting hall and the table tennis hall have been decked up for the wedding scheduled for Saturday evening.

Huge banners announcing the wedding of Gauravi Deshmukh with Atul Bhonsale at the stadium on March 12, prominently displayed on Baner Road, turn bigger near the stadium main gate. Gauravi is daughter of Vilasrao’s brother, Dilip.

On Friday, a pandal was being erected and cushioned chairs were put in place at the weightlifting hall, temporarily renamed the ‘Jijau Hall’. The entrance to the main athletics stadium was blocked by a grand arch. And the table tennis hall to the left of the parking ground, where another huge stage has been set up, was being prepared for another ceremony. Big satin ribbons were wrapped around the seating area and the floor was being cushioned. 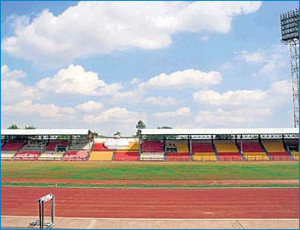 Narendra Sopal, director, Sports and Youth Affairs, Maharashtra, was unaware of the situation but stated that holding such events in either of the halls was not permitted. “We had not given permission to hold ceremonies in any of the arenas,” said Sopal.

Pune’s only professional football club, Pune FC, which play ONGC in an I-league match at the athletics stadium on Sunday, will practise in the morning on saturday and not evening as scheduled. “We will have to cancel tomorrow’s evening practice because of the wedding but we will manage,” said Chirag Tanna, head, Operations, Pune FC. Krida Prabodhini regulars were seen playing cricket on the athletics track as they were uprooted from their training venues.

When contacted, Congress city president Abhay Chhajed said he was not aware as to who was managing the event. Congress leader Ulhas Pawar, known to be close to Vilasrao Deshmukh, said, “I am not aware of the mangement, but I have been invited to the wedding. I am like a family member and would be there through the day,” he said.