Having previously hosted the World Cup way back in 1950, the world expected Brazil to host a memorable spectacle and boy, did they do that for all the reasons – right and wrong. 64 games between 32 countries within 30 days is no cake-walk and to be honest, it does stretch the economy a fair bit. Surrounded by controversy, the estimated cost for hosting the games is said to be more than $11 billion which is a sharp rise as compared to South Africa, 2010 which cost $4.8 billion. Thus making it the most expensive World Cup since the competition began 84 years ago.

FIFA wanted 8 Brazilian host cities, but Brazilian officials chose 12 cities to spread the “wealth” of these games. The Estadio Nacional Arena in the city of Brasilia was estimated to cost about $300 to $350 million, the construction of the iconic stadium in the capital city ended up costing $900 million making it the second most expensive football stadium in the world keeping in mind the fact that there’s no recognized football team in Brasilia to use the $900 million stadium after the World Cup is over.

If you thought that was ridiculous, Brazilian officials go one better constructing a stadium in the heart of the Amazon rain-forest in the town of Manaus. In conditions close to inconceivable for a sport like Football, the Brazilian FA decided to build a $270 million stadium in the city of Manaus, which doesn’t even have their own local Football team, to host 4 World Cup matches. That is approximately $87.5 million a game. In their defence, they intend to turn a giant football stadium in the middle of the Amazon rain-forest with humidity levels through the non-existent stadium roof as a 41,000-seater recreational centre post the World Cup. Well at least the sea-gulls, don’t need to migrate for better luxurious landscapes anymore. 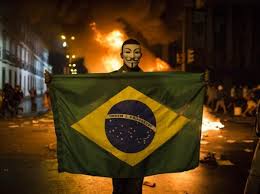 Hosting the world’s most watched tournament, Brazil may have ended up shooting themselves in the foot in terms of world perceptions of their nation. Incomplete stadiums, airports that feel 3rd world-ish, and public workers at subways and museums strike or protest during the tournament, then this creates a massive PR black eye which the nation most definitely will not soon recover from and this could not only hurt short-term tourism but travellers’ desires to return to Rio for the 2016 Summer Olympics. After all, it’s not a cheap proposition to get to Brazil in the first place. If the going doesn’t improve, Olympics 2016 in Brazil might just be something Brazilians wished never happened.