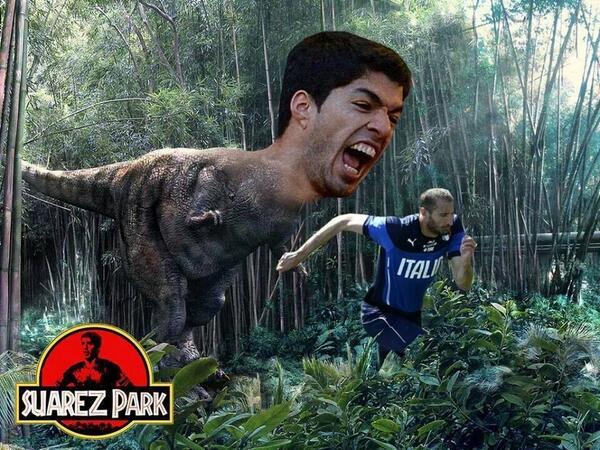 It doesn’t take long to change your perception in the eyes of the public in World Football. It was the same competition back in 2010 when a deliberate Luis Suarez handball knocked out Ghana from the World Cup in South Africa thus breaking millions of hearts and unanimously becoming the arch-villain in the eyes of the Footballing World. However since then, the Uruguayan forward lit up the Premier League with some of the finest football seen in the last decade as he headed Liverpool’s title-camping in the 2013-2014 season.

The heart-break of letting the title slip away from their hands with 3 games to go was coupled with a serious knee injury that meant Suarez’ World Cup dreams were in danger. Expected to head the Uruguayan challenge, Suarez miraculously recovered to be fit and ready for the Group Game against England. A half-fit Luis Suarez inspired Uruguay went on to beat England 2-1 thus knocking 1966 Champions out of the World Cup. Suarez had turned a corner or so it seemed. The villain of South Africa 2010 became the story of Brazil 2014 as he tormented the same country from whom he suffered abuse inexplicably. However, everything was about to go downhill for Suarez again. In the final Group game against Italy, Suarez was found guilty of ‘biting’ Italian centre-half Cheilleni as Uruguay knocked Italy out of the World Cup.

With the whole Footballing world watching, FIFA decided to take stern steps to apprehend Suarez who was found guilty of biting for the 3rd time in his career. Luis Suarez was charged with unsporting behaviour and assault. The Uruguayan forward was suspended for the rest of the 9 matches in the FIFA World Cup and debarred from participating in any football-related activity for the next 4 months. The ban was so severe that the former Ajax man was ordered to pay a fine of 100,000 CHF and banned from all stadiums.

Suarez was also disallowed from participating in training and other related activities at his club. “Such behaviour cannot be tolerated on any football pitch, and in particular not at a FIFA World Cup when the eyes of millions of people are on the stars on the field. The Disciplinary Committee took into account all the factors of the case and the degree of Mr Suárez’s guilt in accordance with the relevant provisions of the Code. The decision comes into force as soon it is communicated,” said Claudio Sulser, chairman of the FIFA Disciplinary Committee. The controversy however doesn’t end there. Despite being unable to participate in any football related activity, Suarez was allowed to complete a 75 million GBP transfer to FC Barcelona – a club who were supposed to be banned from transfer activity for the next couple of seasons. Foul Play suspected? Maybe / Maybe Not.