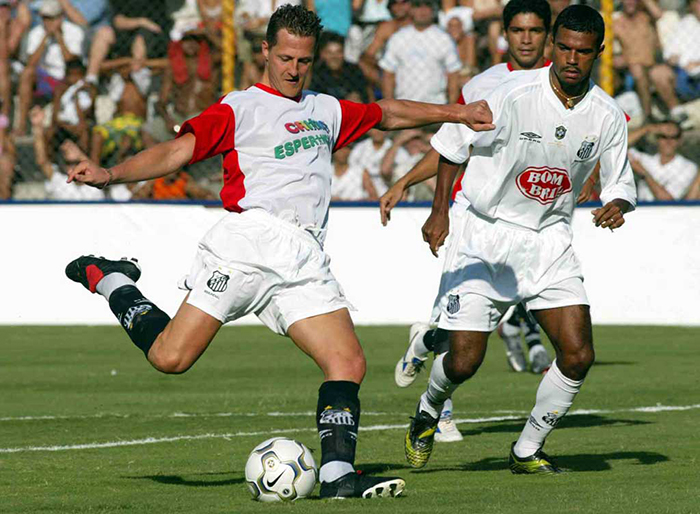 Double delight for German Sports enthusiasts as the 16th of June 2014 will be remembered in German history as a day of great joy. Seven-Time Formula 1 World Champion Michael Schumacher was reported to have recovered from coma following his unfortunate accident in December last year. The good news for German Sport fans didn’t end there as the national football team thrashed highly-fancied opposition Portugal 4-0 in the opening game of the FIFA World Cup in Brazil, 2014.

German Formula 1 legend Michael Schumacher suffered a fatal accident while skiing in the French Alps last year. The German professional driver hit his head while skiing in the resort of Meribel on December 29, 2013. Though, he was wearing a helmet; Michael was said to have suffered sever injuries to his skull. It was later revealed that the accident took place between two ski runs. Following the terrible accident, the former F1 driver was operated on for a suspected brain hemorrhage. Thereafter, Schumacher succumbed and fell into a coma fighting for life.

Former F1 driver Michael Schumacher is no longer in a coma and has been transferred from a hospital in Grenoble, France, where he had been admitted after a skiing accident last year, his management said in a statement Monday.
“Michael has left … to continue his long phase of rehabilitation,” according to his manager Sabine Kehm.
He will continue his recovery at the University hospital in Lausanne, Switzerland. Officials there confirmed that Schumacher was admitted, but gave no further details about his treatment.

The 7-time world champion whose F1 career ended after the 2011-2012 season, Schumacher was treated and looked after in Grenoble since the accident.
Early this year in January, a French prosecutor who was involved in investigating the accident revealed that speed could not have been the reason for the German ace’s fall. The investigative team said that it thought the ski-enthusiast hit a rock hidden covered by snow while skiing through an area that lie in the middle of two marked pistes, which resulted in his losing balance and form. The hidden rock catapulted Michael face first onto another rock. Prosecutor Patrick Quincy used footage from a small camera fitted to the side of the helmet Schumacher wore on the day. He said that Schumacher ended up roughly about 9 meters (30 feet) from the edge of the piste.

‘Win it for Michael’

In the build-up to the World Cup in Brazil, 2014 Lucas Podolski mentioned Michael Schumacher as the German forward revealed that the German team are trying to win the World Cup for him. While speaking to Bild, Podolski said, “Michael Schumacher is as crazy about football as we all are. Unfortunately he is not doing so well … the team and I continue to wish his family strength.” The Arsenal attacker added saying that, “We hope he will be back on his feet soon and eventually he will be able to see one of our matches. If we win the World Cup then it is something which could give him some joy.”

‘Michael’s recovery – an inspiration for the Team’ 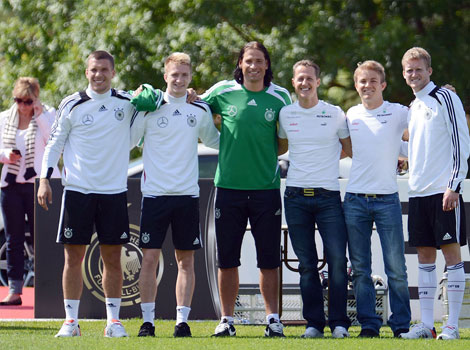 Lukas Podolski and Germany couldn’t have kicked off their World Cup winning ambitions any better after handing Ballon D’Or winner Cristiano Ronaldo a 4-0 thumping in the opener of their Group stage matches. The former Bayern Munich attacker dedicated Germany’s win over fancied-Portugal at the Arena Fonte Nova in Salvador to the recovering Michael Schumacher. Podolski revealed that German players took inspiration from the much encouraging news that the ex-Formula One champion had been discharged from hospital in Grenoble. Speaking to the media after the win over Portugal, Podolski said, “He [Schumacher] is a good friend of mine and it is important to all of us to hear that news that he’s come out of hospital. He’s doing well and he’s getting better and it’s really good news.” Micahael Schumacher who is a football enthusiast and a high-profile fan of his childhood club FC Cologne (Koln) in the Bundesliga was one of the many present when, then German starlet Podolski had signed for the struggling German side from giants Bayern Munich. “Of course it helped us. When you hear the news about a good friend it always helps and you get a little bit of a boost and I was very happy when I heard about the news.” A close personal friend of Podolski, who wore a special pair of boots in the FA Cup final last month as a tribute to the former F1 driver. When asked about Germany’s chances at going all the way and how much of it would be dedicated to the German motor-racing legend the Arsenal striker said, “Yeah if we win the title of course it would also be for a good friend.”

Michael Schumacher is a keen football fan and is a childhood supporter of FC Cologne. A regular in all high-profile football charity matches, before the accident, he also featured for his local side FC Echichens, the club based near his residence in Switzerland.