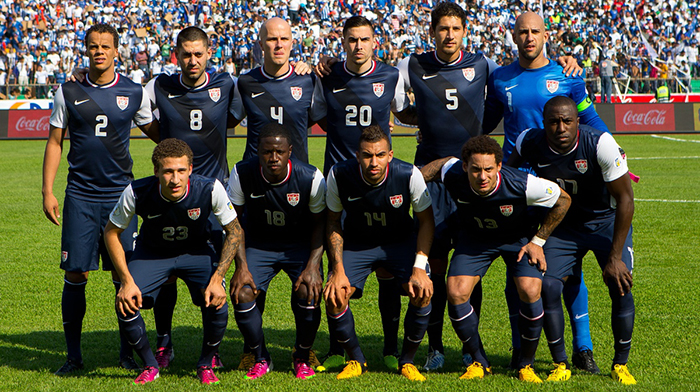 USA will take on Ghana in their first group match of this world cup. USA team will look to put pressure on Ghanaese players with the firepower in their attack, on the other side, the Ghanaian team will rely heavily upon two of their star players Kevin Prince Boateng and Michael Essian.

The USA coach Jurgen Klinsmann will look to go with a 4-2-3-1 combination. Tim Howard, the veteran player will be under the bar. Damarcus Beasley, Matt Besler, Omar Gonzalez and Geoff Cameroon will start at the back.

Michael Bradley and Jermaine Jones are likely to play in the midfield in a defensive position. They will look to control the game in the midfield and can also fall back to cover the defenders.

Alejandro bedoya, Graham Zusi and Julian Green are the three attacking midfielders in this squad. They will have the responsibility to create chances at forward line, and Clint Dempsey will be the lone striker in their team. Dempsey, will be the spearhead of their attacking line. Landon Donovan, who is their all time top scorer is not playing in this world cup and Dempsey will have to bring his A game in this match to help his teams cause.

Key Player: USA captain Clint Dempsey will be the key player for US. They lack experience up front and Dempsey will have to show finishing skills and creative game play to defeat the strong Ghanaian team.

Ghanaian team under coaching of James Kwesi Appiah are looking a strong unit. The team has world class players like Sulley Muntari, Michael Essien, Asamoah Gyan, Kevin Prince Boateng in their squad, which makes them a very formidable unit.

Ghana can opt to go with a 4-3-2-2 combination. The Ghanaian team is traditionally known to be attacking team. They will look to put the US team on defence with their relentless attack. Samuel Inkoom, Daniel Opare, Jonathan Mensah and John Boye are likely to form the defence line of their team. Although they will have the responsibility of  marking the US strikers, they may also flow down deep in the opposition half, due to their attacking instincts.

Christian Atsu, Kwadwo Asamoah and Wakaso Mubarak will play in the midfield. They will have a double responsibility of feeding passes to the forward players and falling back in counter-attacking situation.

Michael Essien and Sulley Muntari will play as center attacking midfielders, both players have the quality to run through any defence with their innovative gameplay. Muntari will use his power game to tackle the US defenders while Essien will look to use his pace to rattle the opposition.

Kevin Prince Boateng and Asamoah Gyan are likely to play as forwards. Both have got experience and skills to successfully convert chances into goals. The US defenders will have a stiff task of controlling while controlling these two from penetrating into their box.

Michael Essien will be the most important player for Ghana. Essien has years of experience behind him and he will be the catalyst in most of their endeavours up front. His quality cross passes and sprint from the wide area can create panic in the US defense.

Predicted score: Because of quality firepower up front, Ghana are expected to have more scoring opportunities and they are predicted to win this game by 3-1.