Jose Mourinho : Truly the ‘Special One’

Either you hate him or love him, but simply can’t ignore him. It’s HIM, ‘The Special One’ aka Jose Mourinho. The Blues fans chanted his name in the last league game last season while the interim manager Rafael Benitez was very much present in the dugout, having recently won the UEFA Europa League to the club. Similarly, the Liverpool fans chanted ‘The Bus Conductor’ while he came out from the tunnel last week. But what about the man himself? He least cared about other’s views and kept on doing what he planned, the silent executioner prevailed one after another. Even after winning consecutive Premier Leagues with Chelsea in his first spell, he just sent a text to the then skipper John Terry and resigned silently. Little care about others, little bother about critics.

The Blues adore him, others just envy him. While he started his second spell with Chelsea, he was spot on from the very beginning. One after another hurdle, he galloped. While the critics just outraged against his ‘Parking The Bus’ or God knows what strategy, he kept his calm and nurtured his ‘pony’ to outrace the biggies. Eventually, the double against Liverpool, Manchester City came which kept his team into the fray for the silverware. His team reciprocated simultaneously and earned the plaudits from the connoisseurs. His boys doesn’t know to play an attractive ‘Tiki Taka’ football, they doesn’t mind giving away more than 50% ball possession, but they know how to plunder a win from the big brothers. As a result, they halted the clinical home run of Manchester City, keeping ‘The Engineer’ Pellagrini aghast.

Is Chelsea on its way to make modern European Football History? 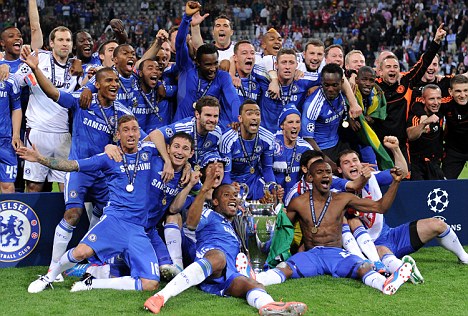 The team, under his regime, have improved leaps and bounds. They have achieved many feats. Another one is just awaiting them. Chelsea is on the verge of making a history in the modern European Club competition. They would be the first club to make into three European finals in a row if they successfully outplay the Wonder Boys of Madrid in the Champions League semifinals. While they overwhelmed Bayern Munich at their own den, Allianz Arena on 2012, it was ‘A Fluke’, as numerous experts commented.

Next year they could not qualify for the Champions League knock out stage but silently killed one after another veteran clubs in the Europa League. Anzhi, FC Basel, Napoli and finally got the better of Portuguese powerhouse Benfica FC and clinched the Europa League on 2013.

Now this year, the gaffer Mourinho took them to the last four of UEFA Champions League again. While they blunted the spearhead attacking force of Atletico Madrid comprising of Diego Costa, Garcia, David Villa (though he didn’t play in the first leg) in the first leg, the opponent craftsman Diego Simeone had nothing to do but to admit that he have to reevaluate his tactics to break the deadlock at the Stamford Bridge. Barcelona, Real Madrid all are outpaced by Atletico Madrid and they already have one hand in the La Liga trophy, but they had no clue to clinch a home win against the robust blues, so the enigma of them, so the mystery of their game play, kudos to ‘The Special One’.

Records from the past

Before 1992-93, Real Madrid won consecutive 5 trophies in the 1950s, all thanks to the charismatic Galactico De Stefano & co. Liverpool, the most successful English club in European Club competition history won back to back trophies on 1977 & 1978 beating Borussia Monchengladbach and Club Brugge respectively. Even the then English biggie Nottingham Forest won consecutive European Cup on 1979 & 1980. UEFA renamed the tournie as ‘UEFA Champions League’ and restructured it on 1992, since then the consistency dimmed a little for these big guns. Even the two league UEFA Cup final was rechristened and renamed as Europa League. The Italian giants AC Milan and Juventus achieved the dazzling feat of making three finals in a row in the modern version European Competition. Though all their appearances were in Champions League final, but the result card was not an alluring one for either of them.

On the primary edition of Champions League, Milan bowed down to Marseille but came back strongly the following year and outplayed Barca by an unassailable margin on 4-0. Next year they continued their smooth run to final but faltered against Ajax Amsterdam. Another Italian club, Juventus emulated the same feat following three years. On 1996 final, they locked their horns with Ajax Amsterdam while the match continued till penalty shootout. Next year, they drew the first blood against Borussia Dortmund, but the Germans came back strongly to clinch the European glory by 3-1 margin. On 1998 final, Real Madrid won their maiden UEFA Champions League, thanks to the solitary goal by none other than Raul.

Only a few hours to come, the blue brigade would come out at the middle in front of zillions of fans to prove their mettle. Whether they would triumph over the visiting Atletico Madrid team, is subject to their given day performance. Nevertheless, a blue fan would always cheer his heart out for the club who are on the verge of making 3/3. Time and again they unleashed resilient shows to outplay gigantic teams, now it completely depends on their credibility to execute The Special One’s boardroom ploys. Once they carry out successfully, there won’t be any toughest hurdle they can’t leapfrog lucratively, that’s for sure.