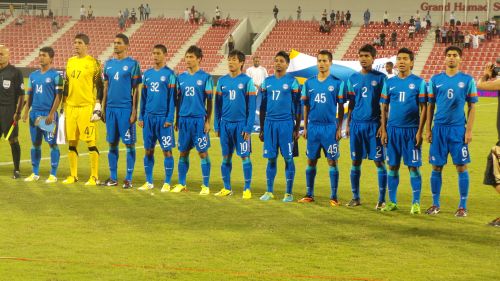 India rode a late strike from substitute SK Faiaz to script a well-deserved victory against neighbours Nepal in their second match in Group A of the AFC U-19 Championship (Qualifiers) here at the Al Arabi Stadium on Sunday (October 6, 2013).

“It was a great performance. We showed that we are a 90-minute Team,” Head Coach Colm Joseph Toal said post match.

“I thought we dominated the game for long spells. Even if we would not have won, I would have been happy for the way these Boys played tonight. The fact that we got a goal in the last five minutes shows their strong character too. There was a lot of support for Nepal. It was a great learning experience for them,” he added.

Collecting possession from just outside the box after Gurba Gagrai had slipped in a delicious pass; Faiaz sped past defenders and made no mistake in slotting home from close range with goalkeeper Alan Neupane only managing to deflect his shot into the goal.

It was like a home match for the Nepalese as a strong 5,000 odd spectators turned up to get behind the Red Shirts.

India though were not overawed by the away-match feel. On the offensive from the word go, Captain Souvik Das dinked a cross inside the area for Kumam Udanta Singh who scooped his 11th minute effort over the bar.

Nepal could hardly make any inroads as Colm Toal’s wards turned on the heat on their ‘noisy’ neighbours with back-to-back corners kicks.

Of the three Germanpreet flag-kick floaters from the right, Udanta drilled his shot wide, Shaiborlang Kharpan could not connect and Daniel Lalhlimpuia hit a defender.

It was only after the half hour mark did the Nepalese find their footing. Suman Lama ballooned his 35-yard screamer, while Asim Jung Karki failed to make the most of a counter attack, curling his left-footer wide of the target.

Every time Nepal had possession inside India’s half, the crowd broke into raptures. But the Indian backline was unfazed. While centre backs Pawan Kumar and Sajid Dhot climbed tallest every time the ball was floated inside the 18-yard box, full backs Gurba Gagrai and Pritam Singh closed down the wide midfielders well apart from going on the overlap whenever possible.

It was goalless at halftime.

India’s best chance of the game came at the beginning of the second half. Gurba and Udanta combined on the right to tee up Daniel inside the area only for Nepal custodian Alan Neupane to close down the striker’s snapshot in time.

Moments later Souvik’s looped effort from the edge of the box dipped just over.

Looking to maintain the tempo, Coach Toal brought in fresh legs in the form of SK Faiaz in place of Daniel in the 59th minute and Alen Deory replaced Kharpan ten minutes later.

Nepal huffed and puffed throughout the second period as India piled on the pressure. Faiaz was guilty of a poor first touch and wasn’t alert on two occasions.

Trying to curtail India’s industry in the final third, Nepal brought in more numbers behind the ball.

India were finally rewarded three minutes from regulation time with Faiaz crowning a great display with a fine strike. 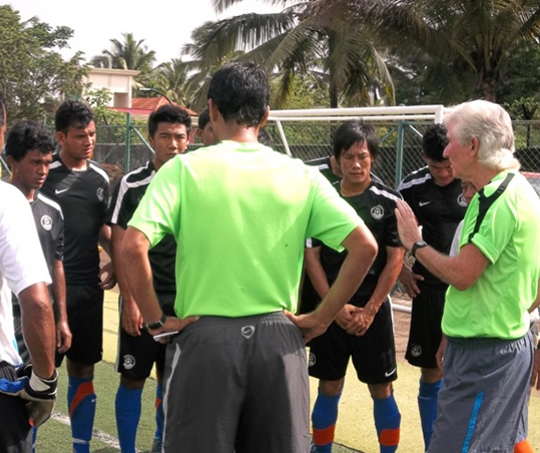