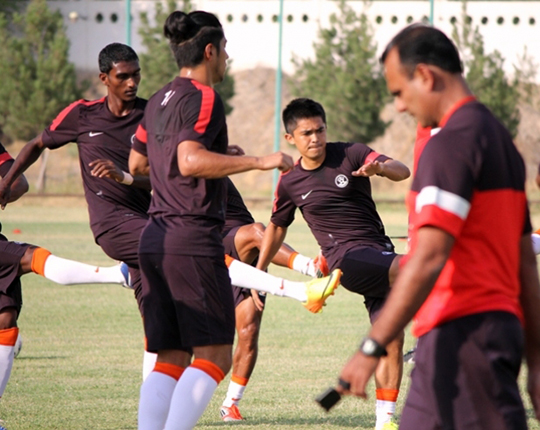 KHUJAND: It’s Tajikistan and everybody knowingly or unknowingly turn to Indian National Team Captain Sunil Chhetri. In return what you get is a shake of the Head from the Champion. A day prior to India’s International Friendly against Tajikistan in Khujand, Chhetri spoke at length to www.the-aiff.comabout his emotions, the opposition, India’s strengths, the significance of the match and much more.EXCERPTS:

Does Tajikistan ring any bell in your heart?

I rate them very highly and most importantly they will be playing at Home. But at the end of the day it’s crucial as to how we play and we are here to give our best.

How much do you carry that hat-trick against Tajikistan in the 2008 AFC Challenge Cup Final?

We have been told the Tajikistan Team has specific plans for you.

The best part of our new Team is that it isn’t about any individual. We are good as a Team and every member of the squad stays aware of it and believes it. As the Captain of the Team it’s important as to how we gel as an unit and play as a Team. It’s best not to pay much attention as to what the opposition has planned for us.

What’s your take on Tajikistan?

The FIFA Rankings say it all. They are 114, we are 145. Whenever we have played against them, they have been very competitive and made it very difficult for us. Undoubtedly they are a very strong side.

I reiterate they would be backed by a hostile crowd of 25000 and we all know how Home support can charge up any Team. It will be a very tough test for us.

Ahead of the SAFF Championship how important is this match for Indian Football?

International Friendlies always give you the right platform to judge as to what an International Team would be. Let’s not forget that this is an away Friendly for us and the SAFF Championship which follows, is also an away Tournament. In that sense both the interlinked.

We know our record in overseas International Friendlies in the recent past have been poor and we have that at the back of our mind.

How has the four-day Camp in Khujand panned out?

Frankly speaking, it would have been nice to have some more days. The National Camp is always so productive. But that’s the manner International Friendlies are played across the Globe. Everyone came directly from the pre-season and since we know everybody well enough, we adapted fast. The Sessions have been enjoyable as much as they have been technical and full of variety.