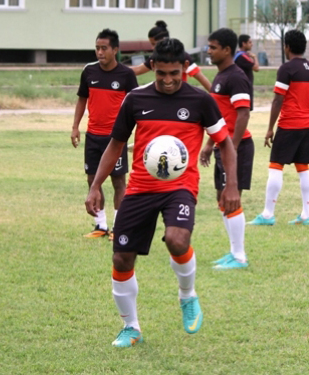 KHUJAND: There’s always a first time for everyone.

With the Tea Session over, the Indian Senior National Team boys walked up to the Hotel Lobby and waited to leave for the first practice session in Khujand ahead of their International Friendly against Tajikistan. The ground was just a five-minute walk, that too within the Hotel Complex itself.

For someone, however, it was supposed to be the first-ever – his first ever practice session with the Indian National Team.

Some four hours later with the exhaust having dried down, Dawson Fernandes, all fresh after a shower and geared up for Dinner, smiles.

“I am the sole Player from Sporting Clube de Goa to be in the Indian squad in Khujand, that too in my first Tour with the National Team. So for you to strike an instant chord wasn’t supposed to be that easy,” the 23-year old Dawson continues.

“The irony stayed that the Seniors made me comfortable. Right from the time we assembled in New Delhi, never was I given cold vibes; and even in my first practice session. I felt at Home,” he smiles again. And you smile too.

“But I want and need to make the most of the opportunity.”

Dawson’s journey began some 12 years back when he was 11 years old. He is 23 now. “I started playing in inter-School Tournaments and joined Fransa’s U-16 Team when I was 14. We won the Goa League that year,” Dawson recollects.

“I shifted over to Salgaocar at the age of 15 and was drafted into the Senior squad when I was 17,” he goes on. You listen.

“But I didn’t get to play a match. Even when Salgaocar won the I-League (2010-11), I just watched and trained. Hence, I had to make a choice and Sporting Clube de Goa showed interest,” you don’t miss the waving of his hand.

“Till then I was a rookie who had done well at age-group level. But Sporting gave me an opportunity and I am grateful to them. I seized it. That Season, I ended up with 6 goals from 11 matches. The next Season, I grew in confidence despite missing around 10 Matches due to an injury,” Dawson pauses.

You have an eye contact and you feel the pain of “missing 10 matches.”

“I grew up idolising Climax Lawrence and Ronaldo,” he informs. “I mean the Real Ronaldo, the striker from Brasil,” he stops you from saying anything more. “Both Climax and Anthony (Pereira) hail from my Village,” he informs.

You can never ignore the sociological aspects of the sport World over. Idols in your vicinity take you nearer to your dreams.

“The biggest challenge in Goan Football stays the recent trend of teenagers opting to move abroad,” Dawson proclaims. You stay all ears.

“Most of the parents force their kids to purse studies abroad. In the process, many a good Footballer at the age-group level gives it up,” he pronounces.

“It happened to me as well,” Dawson opens up. “My parents are settled in UK and stay there with my younger brother. They have been after me since long. And when I spent three years in Salgaocar without playing in a single match, they were after me,” Dawson smiles again.

“But Football struck me more than anything else. So I didn’t give up. I stay alone in Goa with my aunt,” he says it in one breath.

Next day morning, post Breakfast at the Core Exercise Session at the Hotel gym, you watch from a distance. At times, Dawson stays the leader of the pack; the next time, he follows others.

Minutes later, Pradip Datta, the Fitness Trainer instructs. “One minute rest and then we move to the next exercise.”

Even as all, eyes closed, recover, Dawson’s ready for the next Exercise – the unmistakable rush of adrenalin.

“One minute rest, all of you,” Datta stresses. This time Dawson lies down. Forty seconds later, he’s over it again – following instructions. The journey has just begun.