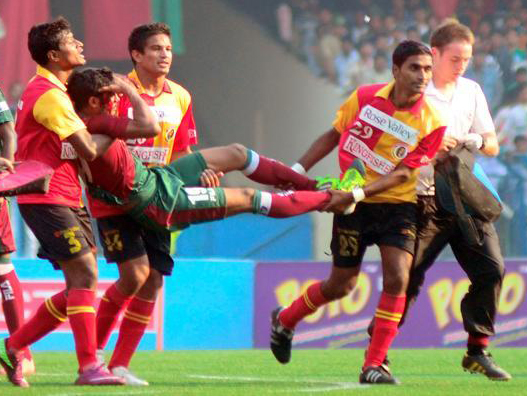 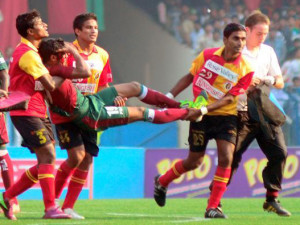 In a watershed decision to increase the viewership of I-league, the premier Indian Football League (for now), the AIFF has decided to drop other teams and play only East Bengal and Mohun Bagan from next season onward.

The decision came at the back of the AFC report where the average attendance of I-league matches was severely criticized.

On an average only 3,000 people attend the I-league matches. This is a ridiculous number. More people turn up to watch golf! We seriously recommend that the AIFF shuts down I-league and starts golf championship instead.

This was a major topic of discussion at the AIFF executive committee meeting and after a lot of thinking they came out with an innovative plan to increase the average attendance of I-league.

We at AIFF believe in constant innovation, changing just the name of NFL to I-league for example. We have decided that I-league will have only two teams, East Bengal and Mohun Bagan. They will play 14 home and 14 away matches throughout the season in the Salt Lake Stadium. Since a lot of people turn up to watch derby, the average attendance will improve dramatically.

This came as a major surprise to all the other clubs who are in deep trouble now. The head of the IFCA, Mr. Deepak Manna demanded an alternative league for the rest of the teams to which Mr. Baans said,

We already have planned an alternative league. This is a wonderful opportunity for the clubs to release their players to IMG-R. We have failed the clubs anyway (sic).

The idea of other clubs playing East Bengal and Mohun Bagan at Salt lake stadium was also ruled out since no one turns up for the big Kolkata clubs if it is not a derby.

We approached a leading fan of East Bengal asking why do they not attend the matches other than derby. The reply was rather astonishing:

Who goes to Salt Lake to watch football? You can’t see a thing from far off stands except for the athletic track. In the derby matches there are Mohun Bagan fans too and it gives us an opportunity to hurl our factory fresh abuses towards them. Other teams play here without fans, except for Prayag United.

“Last time we had fun chasing Prayag fans out of the stadium”, he proudly added.