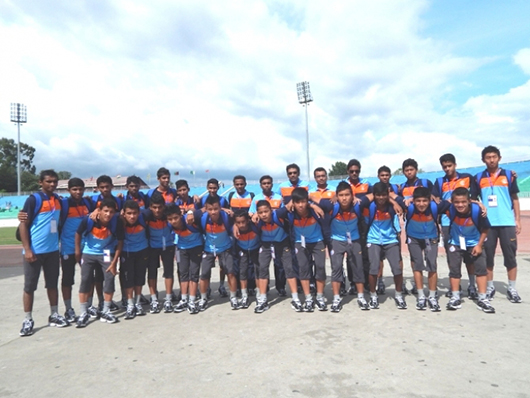 Kathmandu witnessed a historical development as all the SAFF members stand united, for the first time, to protest against India’s decision to break the South Asian tradition of having overage players in youth football teams.

SAFF, a traditional haven for overage players, have been able to keep the tradition going despite the world’s attempt to destroy it with their scientific advances and unfair rules. However, India succumbed to the pressure and verified the age of the U16 squad using medical tests. Thus, a friction between India and rest of the SAFF nations was bound to happen.

Indian Football Network can now confirm that, with the consent of 7 other SAFF members, a show-cause letter has been sent to AIFF, demanding explanations for this outrage.

An insider from Nepal’s  football association, on the condition of anonymity, revealed,

“Yes, it is true that a letter has been sent to AIFF about this issue. The other SAFF members are extremely unhappy with India’s poor handling of South Asian traditions and has hurt the sentiments of billions of people in this part of the globe. It is high time that India needs to throw away its ‘Big Brother’ attitude and be a part of SAFF as an equal partner.”

Another member from the Pakistani delegates in Kathmandu  looked disgusted and said,

“We are now being forced to take a no tolerance policy. If India cannot give reasonable explanations for their actions, we would be forced cancel their membership from SAFF. This is, in fact, not the first time India has done so, even in 2009, India sent its u-23 team to senior’s SAFF championship. We allowed them after a few of the players revealed themselves to be over 23. And anyways who doesn’t want to see a team captained by Sushil Singh.”

Talking on phone, a spokesperson from Maldives football association echoed the sentiments of the other members and said,

“What India has done is an offence of the highest degree. This year we failed to find any overage players and thus, didn’t even sent our team to the tournament. Such is our commitment, such is our standards. If India thinks we cannot remove them from SAFF, they are living in fool’s paradise, we are going to counter this issue with iron fists.”

However, Afghanistan’s coach had an entirely different accusation to make. He blamed Indian team of cheating during the game against them and using magical powers. It turns out that, after Afghanistan’s loss against India in the semi finals, the captain of the Afghanistan u-16 team received a phone call from his 10 year old son, who said,

“I have seen a Bollywood movie called ‘Koi Mil Gaya’ which seems to have a lot of similarities with the match. In the film a team of kids won against a team of grown ups in a basketball match. The kids had the support of an alien called ‘Jaadu’. I wonder if this team also have similar magical powers? In fact, the smile of the Indian coach clearly reflects that he is hiding something.”

“I believe this kid, although just 10 years old, he is a bright fellow. I am pretty sure he will make into the u-16 team within next 10 years. I saw the movie yesterday, the similarities were unbelievable. Look how the Indian goalie was flying around, clearly there is more to it.

One Bangladeshi football association official believes that India’s decision has not only broke the traditions but also lowered the standard of this edition. He said,

“These players don’t have sportsmen’s spirit, they just want to keep  the ball, pass  it within themselves as if someone will steal the ball from them. This is what happens when you get a bunch of kids to play international football.”

However, true to its tradition the ‘Indian response’ was divided. Although some welcomed this change, some continued to criticize this. A former Indian football  international blamed AIFF for being overtly westernized. He said,

“AIFF has lost its roots and traditions. What about those footballers who have been training hard for years to play for Indian youth teams? Don’t we have any responsibility for them? What about the money they have spent to get fake certificates? I know players who worship Cameroon legend Tombie Mimboe, who became younger as time went by. If AIFF doesn’t change its policies, India will not play in a world cup even after 500 years.”

Later in the day, Indian football club’s association has blamed IMG-Reliance for this mishap. According to them, IMG-Reliance has signed all the overage players for its IPL styled league and thus, AIFF had no other option but to send only under-16 age group players.