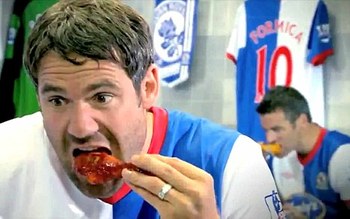 High after getting Rohan Bopanna as an ‘Official fan’, Bengaluru FC management is keeping up their good work and have approached Member of Parliament, the former Bollywood ‘sweetheart’ and ‘Maha Shaktimaan‘ Mr. Raj Babbar as their next fan. Much inspired by Raj Babbar’s Mumbai meal is Rs. 12 comment, Bengaluru FC decided to provide a daily wage of Rs. 12 for players’ dinner.

The developments started when Bengaluru FC players started demanding for experience of dinner rather than only English Premier league experience. BFC were not providing any food for dinner, prompting players to make their own arrangements. A BFC official, on the ‘oath’ of anonymity revealed –

“We are providing premier league standard breakfast and lunch. For the dinner we have decided to use this opportunity to bring in more sponsors to Indian football. There is a KFC outlet adjacent to player’s quarters, they can just get their dinner from there and KFC would be willing to tie up with us. In case there is a problem among vegetarians, we can also tie up with world class health food chains like Mc Donald’s or Burger King. We are flexible and open to options.”

However, the response from the footballers were largely negative. Speaking to Kickoffindia, one player said,

“When we signed the contract we were promised that the club would take care of food and everything but that didn’t happen. First couple of days there was nothing so we raised this issue to the management. They later asked us to pay INR 2000 / monthly in return of breakfast and lunch but no dinner. So we asked them to provide us with three time meal in INR 3000 / monthly but they were reluctant on two-time meal,”

Need my cook here in banglore soon,,can’t eat out everyday,although we do get healthy top class b.fast and lunch @bengalurufc club house.

Perturbed by the negative vibes,  BFC finally decided to make unleash a plan unheard in Indian football.  Our insider says,

“As of now I can only reveal the basic blueprint of our plans. We have understood that like cricketers even our footballers need regular dinner as they are sportsmen too. So, now onward we will provide them Rs. 12 for dinner each day after practice. Mr. Babbar has already told the world that we can have a meal for Rs. 12, we have a young team and they need to show the world what we are really capable of.”

“We have contacted Mr. Babbar to be our Official fan and receive his No. 10 ‘Babbar Sher’ jersey from Sunil Chhetri. Mr. Babbar was visibly pleased, however, inquired whether he will also be treated with a Rs.12 dinner”.

However, opinion among various BFC officials are divided. Another insider revealed to us,

“We are still undecided about Mr. Babbar or Rs. 12. Mr. Rasheed Masood claimed Rs. 5 is enough for a meal whereas Mr. Farooq Abdullah claims Re. 1 is enough. We will probably not settle for Re.1 as it will be very difficult for us to arrange 1 rupee change for each and every player. You know it is very difficult to find Re. 1 nowadays, ask any autowallah in Bangalore.”

“We are also waiting for more options, many of the popular leaders haven’t yet given their statement, it is possible that we might get to values like 50 paise or who knows maybe even less! Thus, BFC believes that it should play the ‘wait and watch’ game and settle for the best bid and choose the most economical leader to be our fan”.

The players, however, are not entirely convinced. According to one player,

“I  am new to Bangalore and probably it is possible to have a Rs. 12 dinner, but it might take 100s of rupees to go there in the autos  here. Bangalore autowallahs don’t seem to be content with Rs.12 dinner.”

“The night clubs I visit, the drinks and food I eat there,  costs me around  Rs. 5000 or more depending on the company. Rs. 12? Ahhhh….well…I am not sure I carry that kind of money, do these eateries accept credit card?”

The rest of the players were unavailable for comments as they were busy watching the movie ’12 Angry Men’.

Meanwhile, BFC approached Uruguayan footballer Luis Suarez who has the reputation of satisfying his hunger in the football field, while the players approached Venky’s for trials in Blackburn Rovers who offer free chicken for their players.